10 Design Flaws in the Average Home

by Terri Briseno
Prev NEXT
3 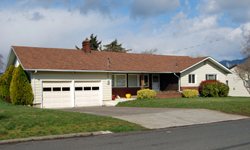 Ranch houses like this one in Oregon, were common after World War II.
© iStockphoto.com/eb33

There is cost in complexity. Woodwork needs shaping, floors need joining, carpets need matching, and windows and doors need custom-fitting. The more complex home designs become, the more there is for people to clean and cover.

After World War II, a new housing type called the ranch developed out of designs by architects and developers such as Cliff May, Alfred Levitt and Frank Lloyd Wright. Lowering costs and combining living spaces led to floor plans with a central living area and rooms coming off of the main room by connecting hallways. When done well, there was an open flow of rooms one into another with windows and doors transitioning to the outside. However, when executed poorly, the interiors of ranch homes were built around lots of rectangles and squares. Ranch housing began as an appealing and modern way to live, but got a bad rap for popularizing long box houses that lack character.

Architectural elements came back into use with copies of more elaborate historic housing touches (like porches and ornate cosmetic decorations), but the rectangle remained as a force to be reckoned with in the majority of Western homes. Leaving the boxy style showed that design mattered to home buyers, as did breaking from a uniform style. Lofts and open plan designs in recent years bring back the rectangle in its more original, or Modernist, form.