by Sara Elliott
Prev NEXT
3 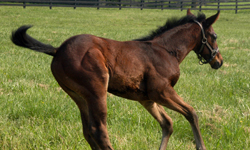 Horses love to play on -- and eat -- the bluegrass in Kentucky.
©iStockphoto.com/visionsofmaine

Although Kentucky bluegrass (Poa pratensis L.) is associated with the state of Kentucky, it's not native to the state famous for horseracing and rolling, blue tinged pastureland. The origin of Kentucky bluegrass is disputed, with one camp claiming that it's native to some areas of the United States, like Utah, while others insist that the colonists first brought it to North America to serve as feed for livestock. Wherever it originally came from, this cool season grass is a favorite with lawn enthusiasts.

One of the first grasses to be used in lawns in the United States, Kentucky bluegrass is a fine bladed grass with vivid greenish-blue coloration. It creates a dense turf that's naturally cold resistant. Newer cultivars have expanded the range and applications for this grass by making it less susceptible to disease and more tolerant of extended dry spells. You can also find cultivars that will tolerate moderate shade. Rough bluegrass (Poa trivialis), a close relation to Kentucky bluegrass, has some of the vivid coloration of its better known relative, but fares better in wetter locations or where conditions are predominantly shady.