10 Green Lawns Without a Blade of Grass

by Clint Pumphrey
Prev NEXT
10 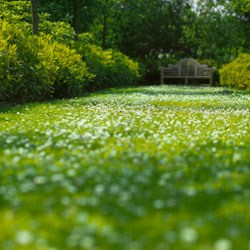 A field of clover is a lovely sight, particularly when it's in bloom.
Franois De Heel/Garden Picture Library/Getty Images

It's said that four-leaf clovers are lucky -- which is exactly how you'll feel when you see how well the plant can grow in your yard. Clover, now seen by lawn purists as a weed, hasn't always had that reputation. In fact, Andrew Jackson Downing, who published the first landscape-gardening book for an American audience in 1841, instructed homeowners to "[s]ow four bushels of it to the acre and not a pint less as you plan to walk on velvet!" The plant fell into disfavor in the 1940s when chemical companies introduced the herbicide 2,4-D, which killed not only unwanted plants like dandelions, but also clover.

The most common type of clover in the United States, white clover, grows throughout the country but prefers cool, moist climates. It doesn't require as much moisture as grass and usually maintains its deep green color even in hot weather. Unlike grass, clover grows well in sandy soils and actually fertilizes itself by pulling nitrogen from the air through a process called nitrogen fixation. And when the plant is flowering, you'll enjoy the little white blooms almost as much as the honeybees do.