Browse the article 10 Hand Tools that Have Real Power 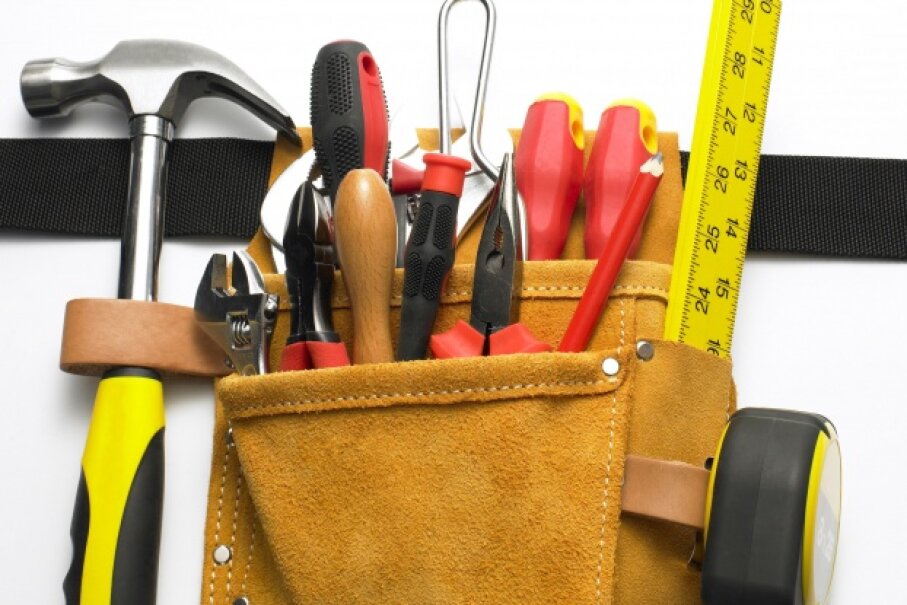 Who says power has to come from an electric socket? Many of the most common and important tools have no power cords to speak of. ©Monkey Business/Thinkstock

The oldest stone tools discovered so far are from Ethiopia and date back 2.3 million years; they include sharp-edged stone flakes and hand-held choppers -- not things we normally find in our modern-day tool chest [source: Freeman].

The first hand axe didn't appear until about 1.7 million years ago, and since then we've not only been perfecting our craft, we've been improving upon what's inside our toolbox [source: Reardon]. Tools used by the Romans resemble (some very closely) the tools we use today, and by 1916 we were ready to put a little power behind it all: S. Duncan Black and Alonzo G. Decker -- who had launched a business together in Baltimore six years earlier -- applied for the very first patent for a portable power tool [source: Stanley Black & Decker]. Power tools are handy -- you'd be remiss to leave a general-use power drill out of your toolbox, for example. But the power of a tool doesn't need to be constrained by whether or not it's powered by electricity or powered by your hand -- power also lies in the ability to affect a behavior.

With that in mind, let's talk first about the humble paint brush and its ability to unlock the power of color. 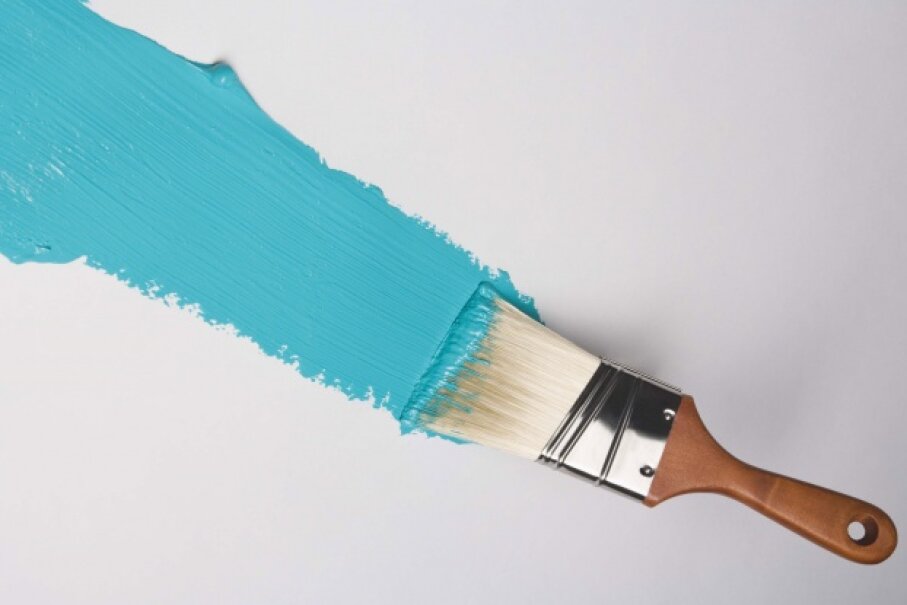 The power of color is often spoken of (at least in paint ads), but the power of the paintbrush is often overlooked. ©Comstock/Thinkstock

Paint application tools, whether in the form of a paint brush or a paint roller, have the power to bring color into our lives.

Color affects our moods and feelings, and depending on the color palette you choose for your space, it's believed that you can have a bit of influence over such things as how calm you feel to the success (or failure) of your diet. The color red, for example, is associated with warmth, passion, optimism and energy, and it is thought to encourage conversation. That means it could be good in the dining room and to stimulate your appetite -- or bad, for instance, when used in a dieters' kitchen. And that influence is wielded with a paint brush (or roller). 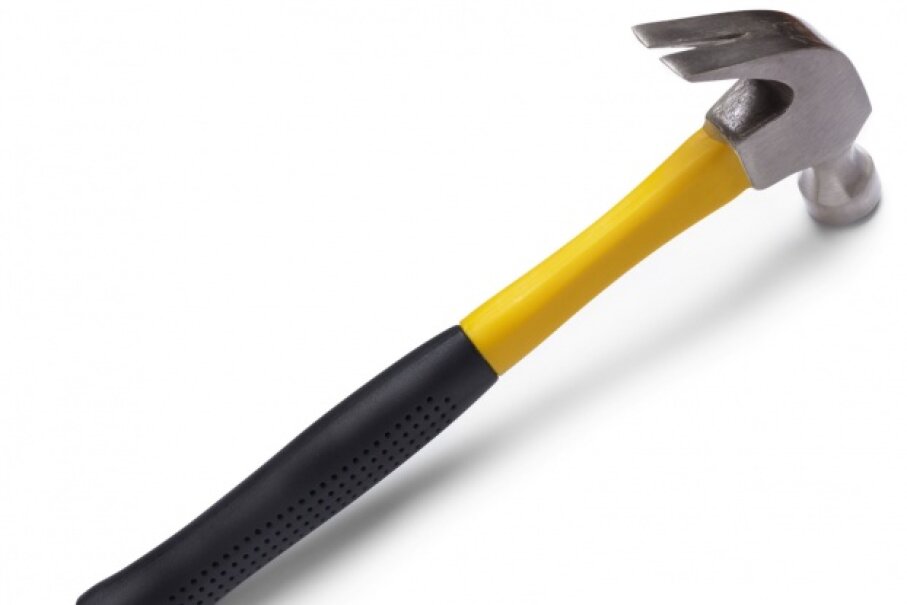 A claw hammer usually conjures instant images of pulling or pounding nails, but did you know you can also use it to dig in the garden? ©Ingram Publishing/Thinkstock

A claw hammer is at home in any tool box (as well as in any kitchen or utility drawer). Use it to pound nails into wood with its steel head and remove bent nails (or nails that otherwise need removing) with the notched end. It's a powerful hand tool that comes in a few varieties, including those with curved claws and those with straight (called rip hammers). Straight or curved, any type of claw hammer can drive or remove nails -- and can also be put to use in a few other creative ways. Use your claw hammer to help you dig a hole, tear down drywall, split wood, and even break some ice -- and in a pinch, it could make a pretty good back scratcher [source: The Family Handyman]. 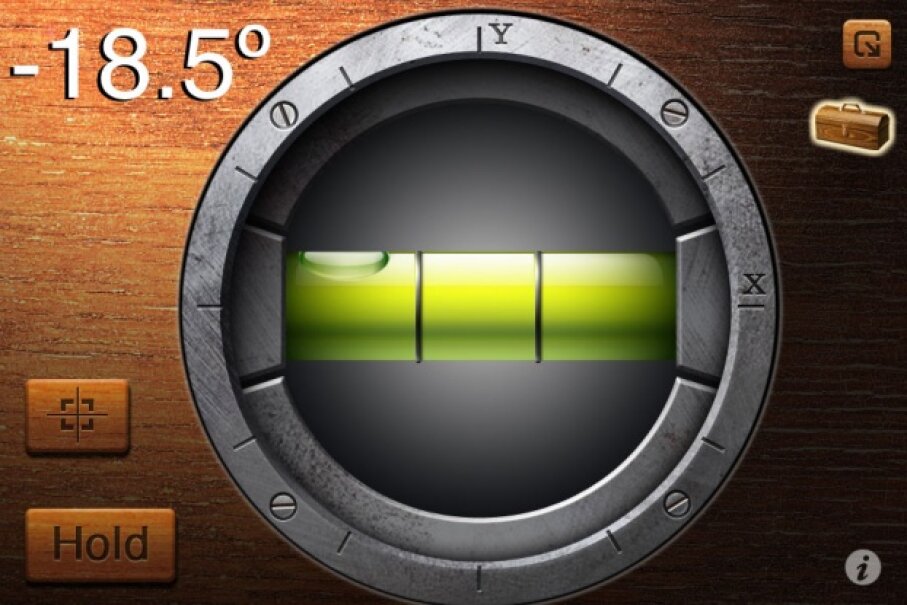 If you need a little digital in your tool kit, apps like the iHandy Level will fit the bill. Screen capture by HowStuffWorks staff

Hanging a picture on your wall is considered a fairly entry-level DIY moment; hammer, nail, picture hook and voila -- a frame hangs on a wall. But to hang a straight picture you'll need to use a level.

There are different types of levels for different leveling jobs. If you hang wallpaper, for example, you'll want to get your hands on a plumb bob level; but if you think you'll only use a level for hanging pictures, look for a long carpenter's level or a laser level (which is useful if you like to hang pictures on an angle) [source: Lowes].

High-tech handyman tip: iOS and Android users with a few pictures needing to be hung on the walls can download a bubble level app instead of storing a separate tool. 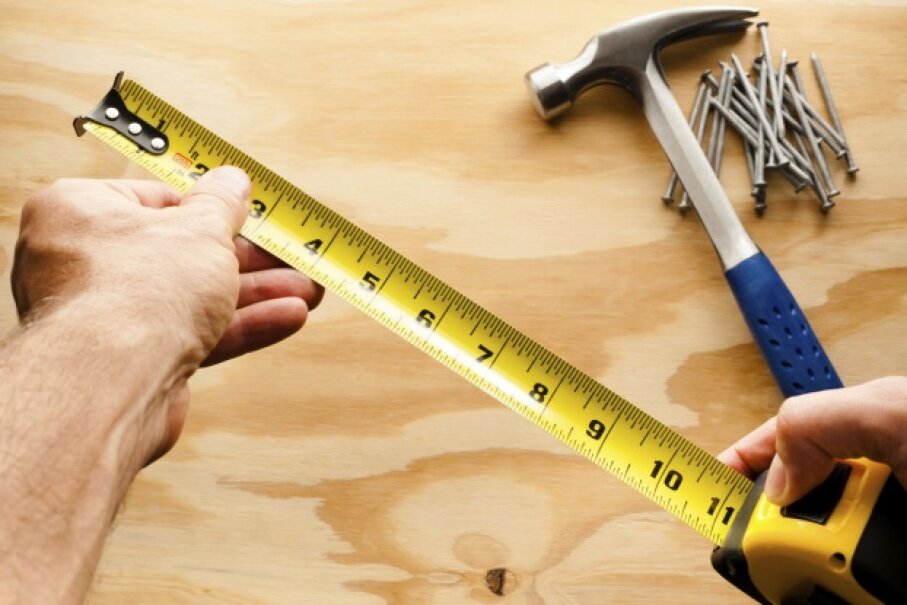 Taking accurate measurements while working on a project is vital to a successful result. ©iStockphoto/Thinkstock

The tape measure's use is obvious from its name: It measures height, width and length. It's been around since the mid-1800s, and by the turn of the 20th century, the retractable-style measuring tape we know and use today began replacing folding measuring sticks [source: Alfred]. It may not be a fancy power tool like a table saw or a drill press, but the tape measure gives you knowledge, and knowledge is power.

Measure twice, cut once, or so the age-old carpentry saying advises. Basically, when you double-check your work (measure twice) you're more likely to avoid an error (cut only once). 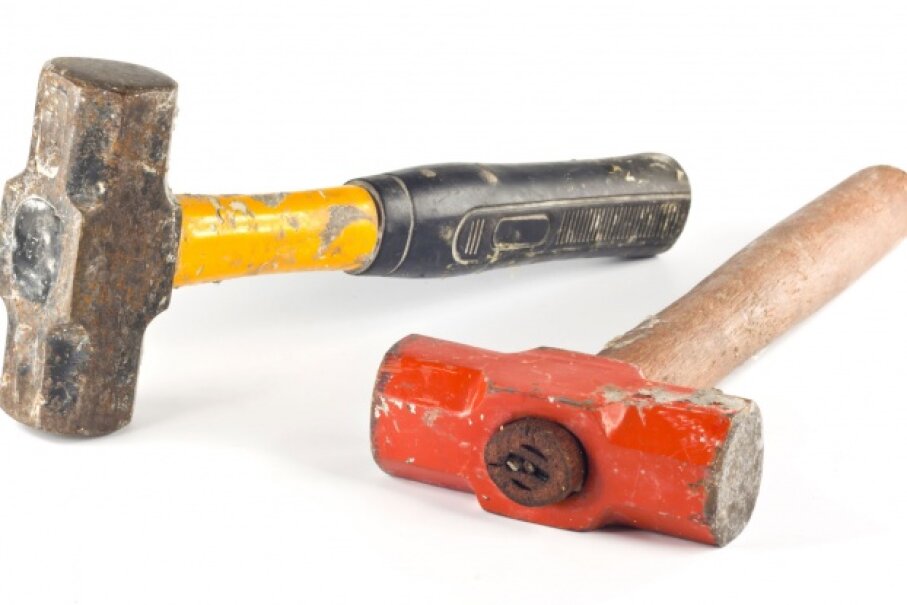 Don't let the power of your sledgehammer give you a Thor complex. Use the power of this tool wisely. ©iStockphoto/Thinkstock

To create, you must destroy. To destroy, you're going to need a sledgehammer, at least when a jackhammer isn't available -- and who among us has a jackhammer in their garage or storage shed?

A sledgehammer is just a large hammer with a big, heavy octagonal-shaped steel head and a fiberglass handle (old-school sledgehammers have wooden handles). It's that big, heavy head that allows you to put more force behind your destruction; the size helps distribute force over a wider area than other hammers [source: Pieh Tool Company, Inc.]. Heads weigh between 2.5 and 20 pounds (1.1 and 9.1 kilograms), and handle lengths vary between 1 and 3 feet (30 and 91 centimeters) [source: VanHemert]. 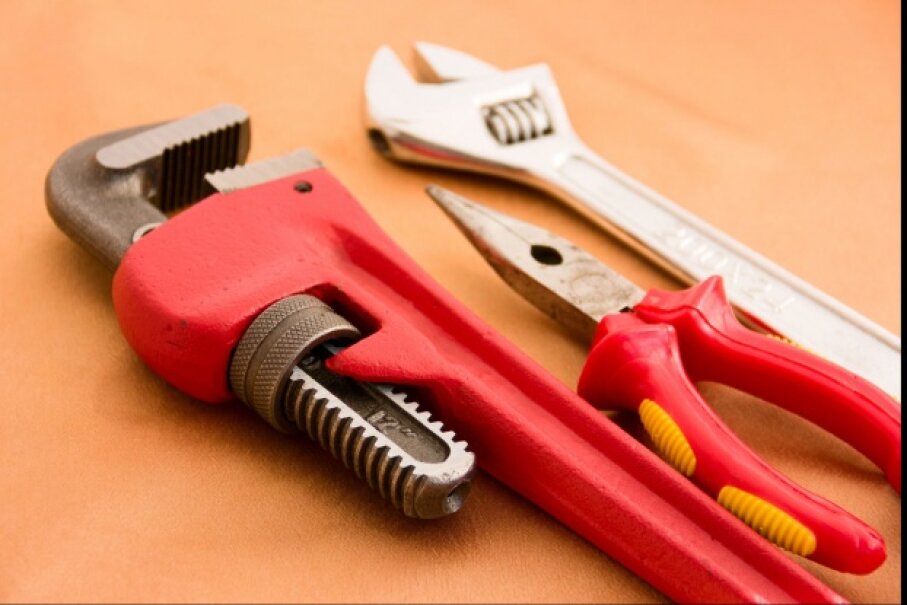 Adjustable wrenches are workhorses -- most well-appointed tool kits will have more than one. ©iStockphoto.com/MrLonelyWalker

The adjustable crescent wrench is one of the do-it-all powerhouses in your toolbox. The sliding jaw of this wrench allows it to accommodate a range of sizes of nuts and bolts -- it's designed to be used with square and hex nuts -- which means it's good for everything from automotive repairs to household projects.

A pair of channel-lock pliers can cover the bases the adjustable crescent wrench can't; these pliers are also happy to moonlight as a clamp or a wrench if needed. They can be adjusted to objects of ranging sizes because these pliers have jaws that slide open and that can be locked into place, which is good for working on everything from a plumbing project to simply tightening a loose bolt. 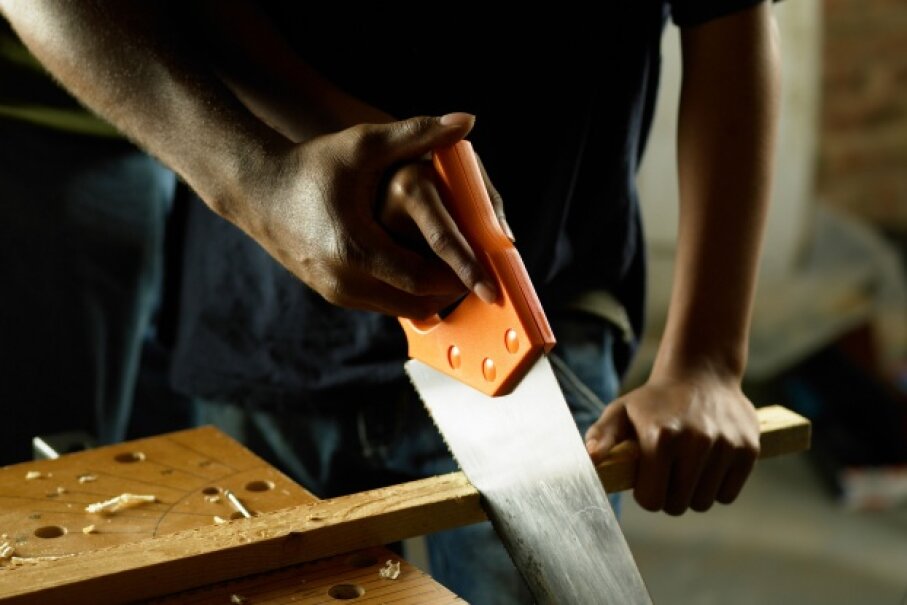 To make sure you're using the correct saw for the job, check out the teeth. ©Lifesize/Thinkstock

There are several types of hand saws, but you won't need them all; the thing you need to know about is their teeth -- specifically, the number of teeth per inch (tpi). A saw's tpi will tell you what material it can cut, how well it will cut it, and how smooth the edge will be. Saws with finer teeth leave a cleaner cut. For example, a rip saw's teeth will aggressively cut through wood but will leave a rough edge, whereas the teeth of a crosscut saw, designed for general use, are finer than those of the rip saw and leave a smoother edge. 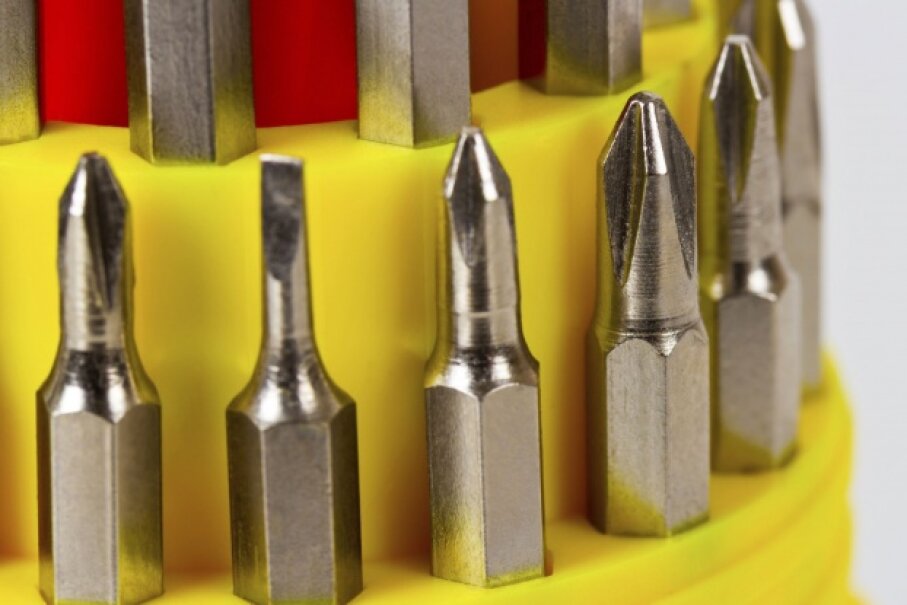 While flat-head and Phillips bits are the most common, there is an almost endless variety of bit types available. ©iStockphoto/Thinkstock

Screwdrivers come in to two common flavors: slotted (also called flat-head or standard), and the Phillips (X-shaped) head. A multi-bit screwdriver allows its tip to be interchanged in the shaft of the tool. The simplest type of multi-bit screwdriver will use slotted and Phillips tips, but these powerful hand tools come in sets with dozens -- or more -- of bit options, from the flat-head and Phillips basics to square-tipped, torx, sockets, hex keys, precision and insulated, among others. Some sets allow for more customized work such as those with longer bits for hard-to-reach spots, or offer trade-specific features.

Worried about losing bits? Try an auto-loading type of multi-bit screwdriver, where the bits you need are stored in and served from the shaft. 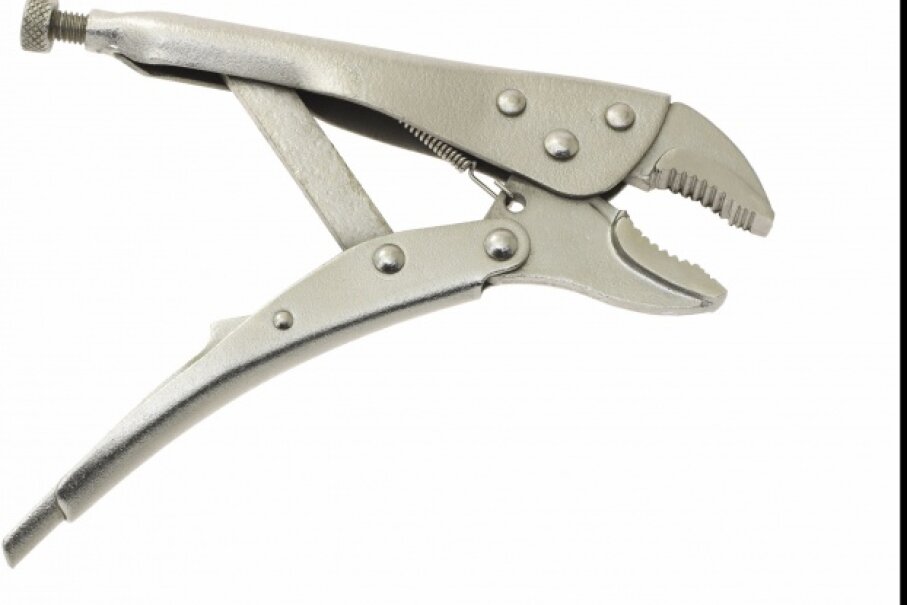 Oh, sure, you can use your locking pliers for DIY jobs. But some people also use them as replacement car shifters. ©iStockphoto/Thinkstock

Since 1924, no tool box has been complete without a pair of locking pliers, also known as vise-grip pliers. Locking pliers work like any other kind of pliers; they help you grip things. But locking pliers also allow you to tighten the jaws of the pliers around the object -- or whatever it is you're working on. By clamping the jaws into place you "lock" the pliers, and they won't slip.

Think outside the toolbox when using your locking pliers. Some people report using theirs as replacement shifters (both car and bike), as well as a battlefield surgical tool (sterilized, of course), and even as a kitchen tool to make removing hot pans or foods (even cannoli shells fresh from cooking in oil) a little easier -- and safer [sources: Sawyers, Irwin]. 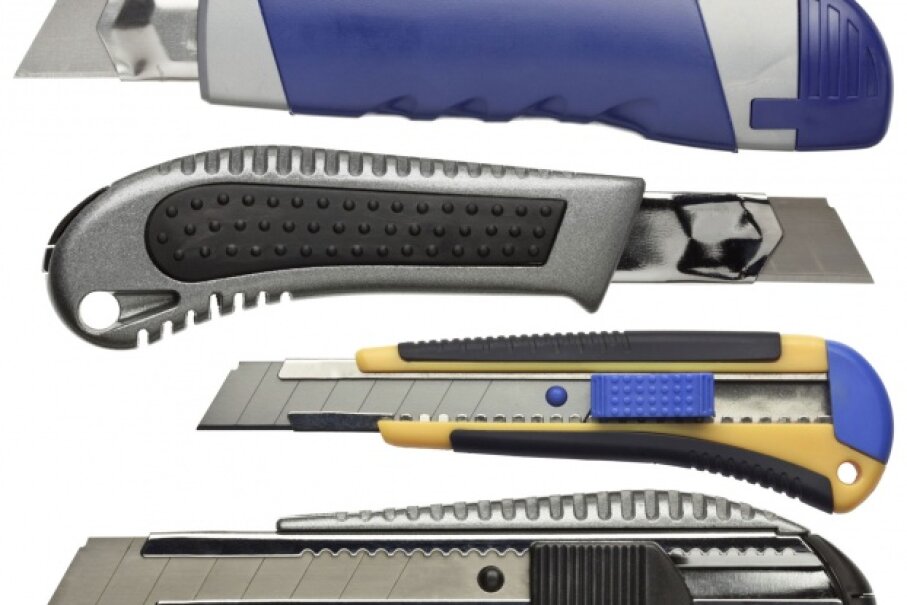 There's a utility knife for every taste and grip preference. ©iStockphoto/Thinkstock

What's in your kitchen junk drawer? Among the pens, stamps and batteries many of us stash in a convenient spot is one of the most handy hand tools of all: the utility knife. And many of us only use that knife when we're opening packages, which is too bad because your utility knife has power. More power than needed to cut through a little tape or twine. For example, that knife's straight blade can be used to cut carpet and vinyl flooring (and if you swap the straight blade with a hooked blade it'll make your vinyl flooring project even easier). Use it with a T-square or a ruler to score and cut drywall [source: Mahoney].

Sharp knives are safe knives, and remember to always point the blade away from yourself as you cut.

Jackhammers offer incredible power when it comes to breaking down hard substances. Find out how these demolition marvels work.

Green promotes health. Blue, calmness. White will make your living space seem bigger, but it can also seem empty. And yellow, well, it makes babies cry. I really enjoyed the look into the psychology of colors, and I love that a simple brush or sponge and a can of paint can totally transform the feeling of a living space. What I don't love, though, is taping.