by Bambi Turner
Prev NEXT
9 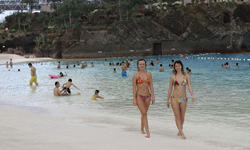 Visitors to the park walk along the artificial beach in the Ocean Dome.
Koichi Kamoshida/Getty Images

On days when it's too cold to swim at the beach, guests at the Sheraton Seagaia Resort in Miyazaki, Japan, can head to the resort's indoor pool. Known as the "Ocean Dome," Seagaia is home to the largest indoor pool in the world. The pool is nearly 1,000 feet (300 meters) long and 328 feet (100 meters) wide, and it's covered by a retractable roof that lets the sun shine in on warmer days. Several times a day, the pool is cleared to allow surfers to catch a wave, and an artificial volcano erupts every 15 minutes. Ocean Dome's beach is made from crushed quartz, and there's even a separate children's pool and waterslide area [source: Seagaia].

Seagaia's Ocean Dome cost a staggering $2 billion (200 billion yen) and opened in 1993. It has been closed down several times since then due to changes in ownership or financial difficulties [source: Scanlon]. In October 2007, the Ocean Dome was closed indefinitely as the resort began a major renovation and restructuring [source: Seagaia].