Browse the article 10 Must-have Tools for Any Workshop 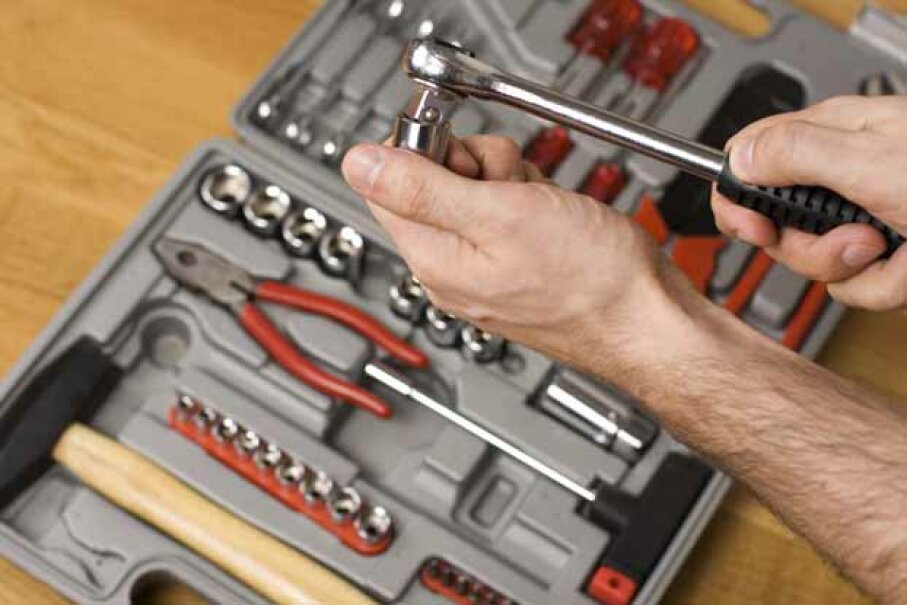 We admit, outfitting your workshop with handsaws and hammers may feel antiquated, but there are just some jobs that can't be accomplished with a power tool. For a well-stocked workspace, you'll need a few multipurpose tools for routine home maintenance or the occasional DIY improvement project.

And, thanks to this roster of perpetually expedient hand tools, you won't even need to take out a second mortgage to feel like you've mastered your domain. No matter your skill level or experience, these 10 will prove, well, handy. 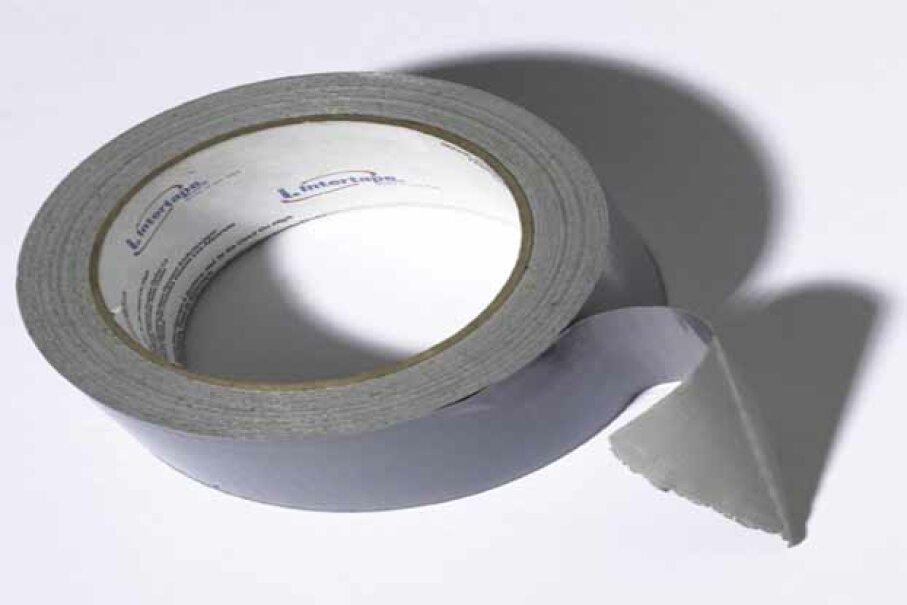 Duct tape has patched up a particle accelerator, made equipment repairs on the moon and fashioned everything from waistcoats to wallets. Purestock/Thinkstock

While some people may not consider this a tool, this multi-use product has patched up a particle accelerator, made equipment repairs on the moon and been used to fashion everything from waistcoats to wallets. Yes, we're talking duct tape, one of the most inexpensive and indispensable tools a well-equipped workshop needs [source: Popular Mechanics].

Today, duct tape can be purchased in a variety of colors and widths, and is a home and workshop staple. Just don't use it for actual ductwork. According to scientist Max Sherman of the Lawrence Berkeley National Laboratory, duct tape "failed reliably, and often catastrophically," when used to seal ducts [source: Sherman]. Good thing it's still a handy tool for, well, everything else. 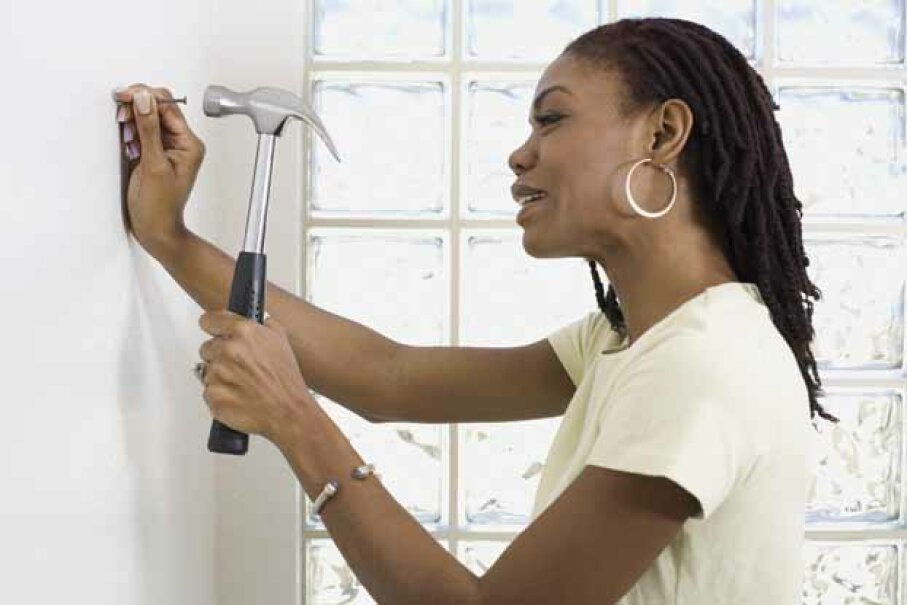 When choosing a hammer, consider one with a magnetized head that makes it easier to start a nail. Blend Images/Thinkstock

A well-oiled workshop needs at least one hammer. Lucky for you, there are more options than ever. And unless you're a serious hobbyist or professional woodworker, just about any variation will do.

Take the anti-vibration hammer, for instance. This beauty has a tuning fork hidden within its padded handle that will reduce vibration. Also helpful? A hammer with a magnetized head. This version makes it oh-so-much-easier to start a nail without smashing your fingers in the process. Whichever helpful innovation you choose, consider the face on the business end of the hammer; a smooth face will help prevent marks on surfaces, while a textured face will offer traction when pounding nails.

In addition to a claw-foot hammer used to drive in nails, consider a rubber mallet. These are great for driving stakes into the ground when you're setting up a tent or banging on wood or other soft surfaces without leaving a mark [source: DIY Network]. 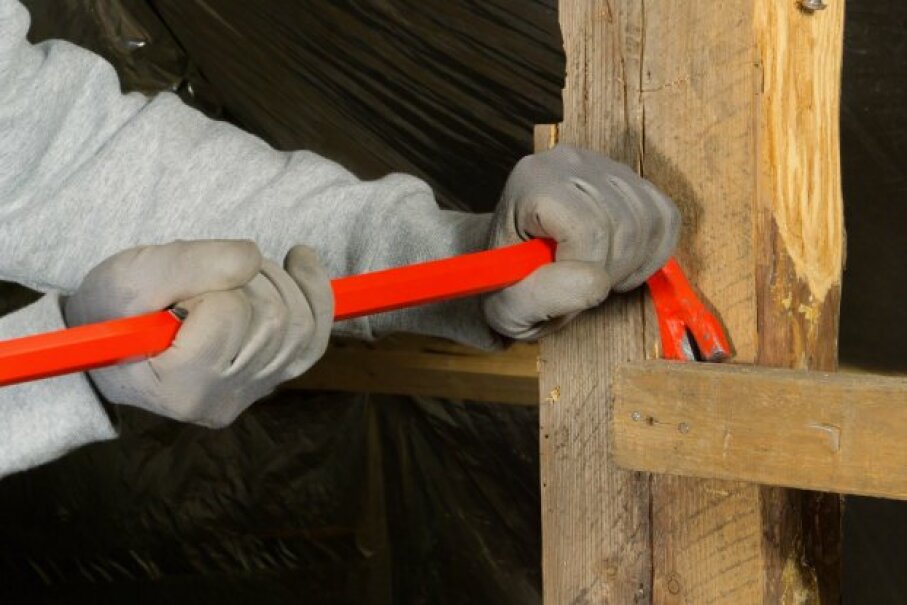 You might thing they're just for smash-and-grab operations, but crowbars have legit uses in the construction world. Zoonar RF/ThinkStock

Watch nearly any action movie and you'll see a bad guy with a crowbar, right? Perhaps. Turns out, what often is believed to be a crowbar actually isn't. A crowbar is a steel bar with one end culminating in a flat wedge. Its opposite end may bend at a slight angle and end either in a dull point or in a wedge with a split in the middle.

What you'll see on the screen has a more dramatic appearance. Like many of its cousins, this steel bar has a split beak at one end, like a crow's foot. However, unlike a true crowbar, the other end has a shepherd's hook. It's called a wrecking bar [source: Brians].

Kevin Bacon and six degrees of separation aside, either one of these tools would serve you well in your workshop -- especially when you have some demolition to do. Both are good aids when you need to pry loose boards or pull nails out of wood, and unless you're a construction expert, you'll find crowbars and wrecking bars work about the same. 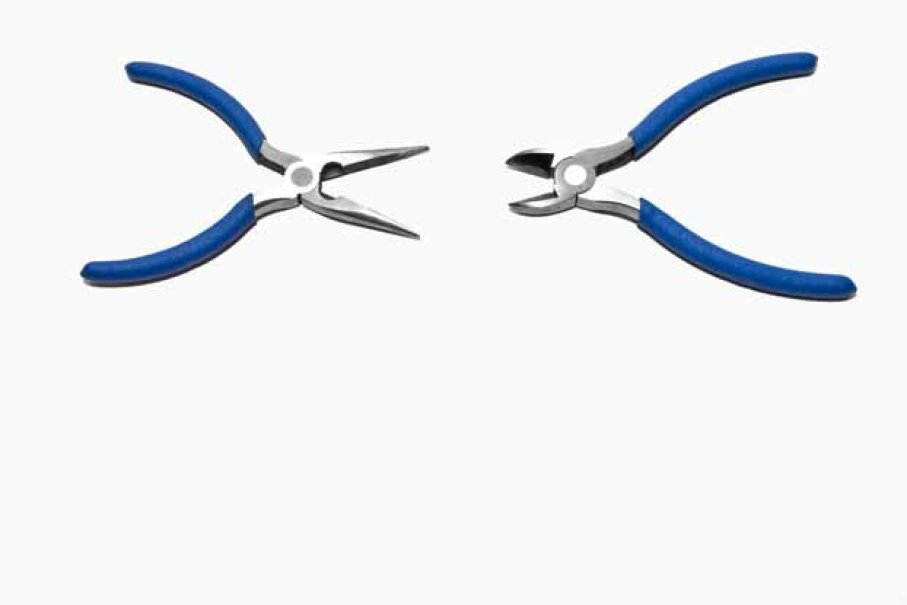 Two varieties of pliers on display here: The one on the left is a wire cutter and the one on the right can grip larger objects. Fuse/Thinkstock

Pliers are the "opposable thumbs" of the home workshop. Without this handy tool, you'd have a hard time gripping, turning or twisting things. While there are a number of variations, ranging from long-nose pliers designed to grip tiny wires to expandable pump pliers made for gripping, we recommend the common slip-joint pliers. This all-around tool can grip, bend, twist and turn wires, and open stubborn lids. Plus, it has a bolt near the pliers' teeth that can be made to "slip" into a second position, enabling the pliers' mouth to open wider and grip larger objects. There are limits, though. To loosen most nuts from bolts, for example, you'll need a wrench.

Whichever type of pliers you decide to add to your home workshop arsenal, choose one that has at least a 2.5-inch (6-centimeter) gap between the handles when closed; this will prevent you from pinching your palm or fingers when using the tool. And be sure to regularly put a drop or two of oil on the hinge. This will help your pliers work better, while extending its life [source: Canadian Centre for Occupational Health and Safety]. 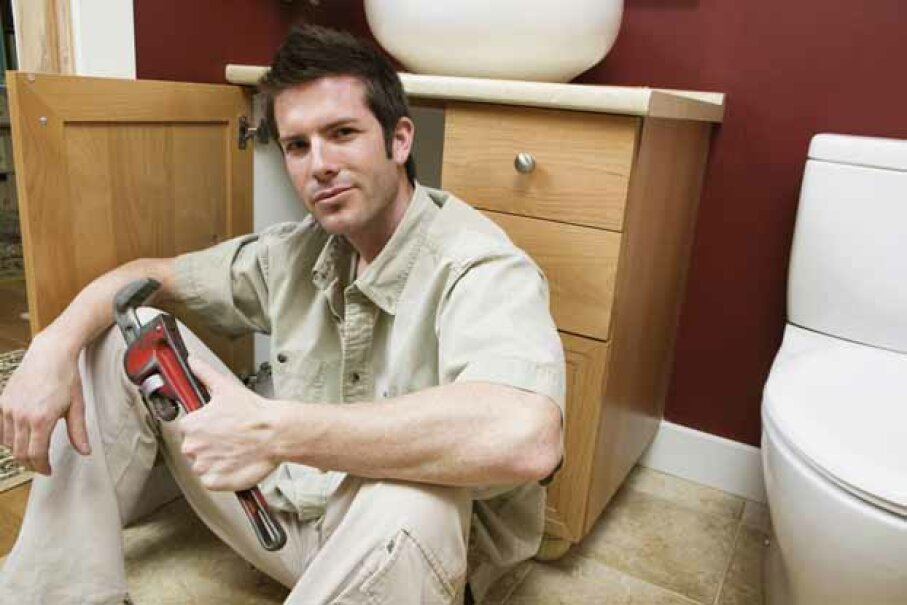 A pipe wrench is good for plumbing jobs as it can tighten and loosen pipes. Purestock/Thinkstock

The wrench: This indispensable tool is used to loosen or tighten nuts and bolts. There are several different types of wrenches, one of which is ideal for a home workshop. The crescent wrench, first manufactured by the Jamestown, N.Y.-based Crescent Tool Co. in 1907, was designed for early automobile owners who needed to adjust the brakes and clutches on their vehicles. The tool assumed its place in history, however, in 1927 when Charles Lindbergh took his famous trans-Atlantic flight and quipped that he took only, "gasoline, sandwiches, a bottle of water, and a Crescent wrench and pliers" [source: Popular Mechanics].

What makes the crescent wrench unique are its adjustable jaws. Thanks to the turn of a dial in the handle, one side of the jaws can expand or contract. This allows the user to make it exactly the right size, rather than having a battalion of wrenches that are various sizes and taking up room (and, initially, your budget) [source: Encyclopaedia Britannica]. A pipe wrench is good for plumbing jobs as it can tighten and loosen pipes. 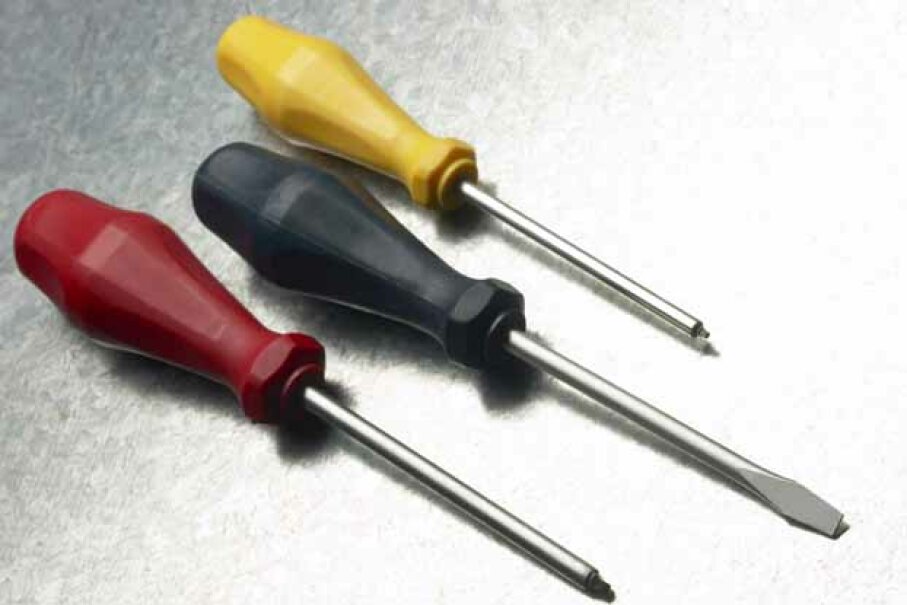 You'll want a variety of screwdrivers in your tool box. The flathead (depicted in the middle) is used for screws that have one slot across. The Phillips (pictured on the ends) works with screws that have cross-shaped tips. AbleStock.com/Thinkstock

Whatever the head, choose a screwdriver with a cushioned, textured grip. This will help you torque tight screws. And consider buying a few flathead and Phillips-head screwdrivers in a variety of handle lengths. You may not use the shortest handle lengths often, but when you need to fit in a tight space, you'll be glad they're in your arsenal [source: McKay]. 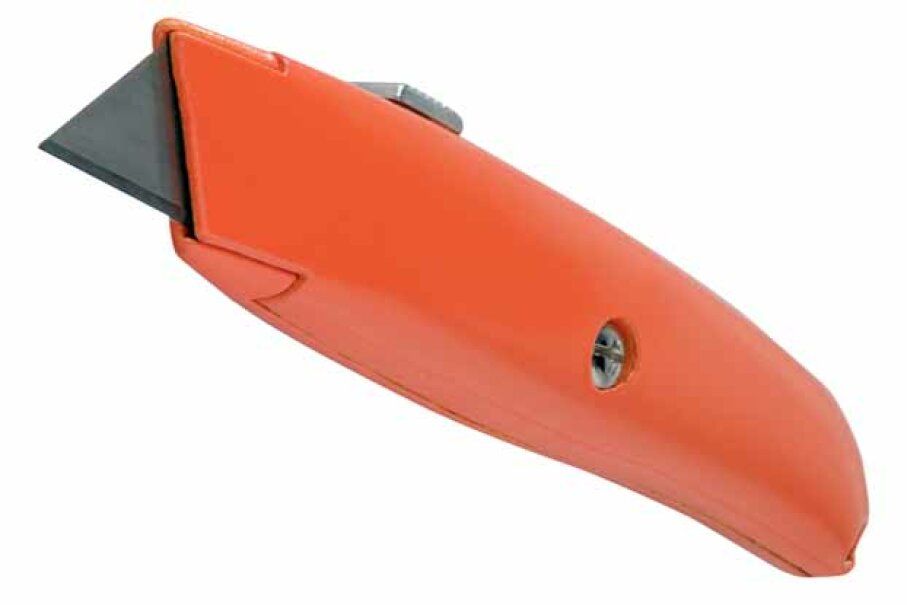 A utility knife can break down cardboard boxes, trim carpet, cut drywall, and do a hundred other things. Brand X Pictures/Thinkstock

The utility knife is one tool a well-stocked workshop should never be without. At $5 to $15, this retractable knife is inexpensive and easy to use. It's a pint-sized workhorse that can be harnessed to break down cardboard boxes, trim carpet, cut drywall, splice cords or accomplish myriad other workshop tasks.

Although you can occasionally find nonretractable utility knives available for purchase, steer clear. Wielding -- and storing -- a perpetually open, razor-sharp knife is just a bad idea.

On the flip side, retractable utility knives with snap-off blade segments are ideal. Because the thin blades dull quickly, you can simply snap off worn sections as needed (as long as you've availed yourself of pliers and safety goggles) [source: Mahoney]. 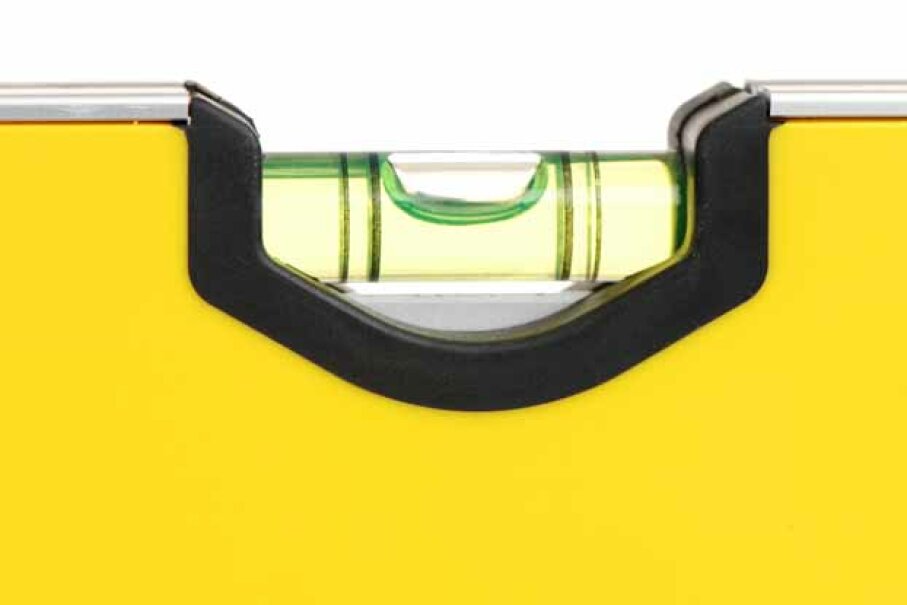 A level is very useful for hanging pictures straight. iStockphoto/Thinkstock

Every workshop needs a level. Ideal for ensuring well-positioned wall hangings and perfectly upright posts, a level lets you know when you've achieved a horizontal plane. It does this through the use of an air bubble trapped in liquid and encased in a glass tube centered in a plastic, wooden or metal frame. Simply place the level on a surface and the air bubble can be measured against two static, vertical lines. If the air bubble is not perfectly centered between the vertical lines, the surface is not level [source: Encyclopaedia Britannica].

The most common levels come in 2-foot (61-centimeter) and 4-foot (122-centimeter) lengths, although longer levels are available, too. For durability (and aesthetics), steer clear of plastic versions; an aluminum or wood level should last a lifetime, particularly if you keep the wood well-oiled and store in a cool and dry place. Some level manufacturers offer replacement vials, should yours break, and this guarantee will be spelled out on the label [source: Carter]. 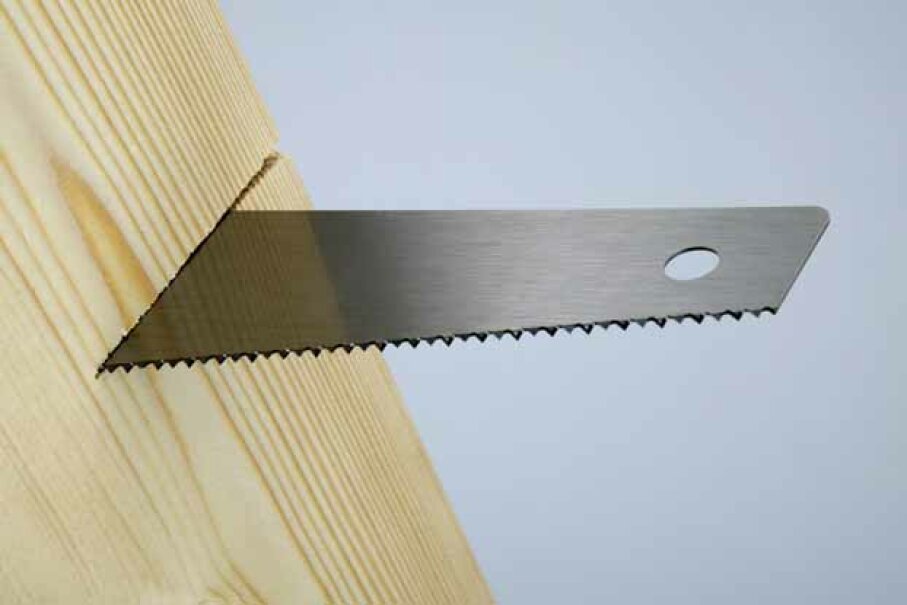 You should own two types of saws: A crosscut saw cuts against the wood grain while a ripsaw cuts parallel to the grain. Fuse/Thinkstock

Your grandfather or great-grandfather probably had a handsaw in his workshop, and you should, too. You never know when you may need to shorten a plank, build a sawhorse or fell a wind-damaged tree branch.

There are two types of general-use handsaws, and it's a good idea to have both on hand. A crosscut saw has backward-angled teeth and is used to cut against the wood grain, while a ripsaw has downward-facing teeth that flex left and right during action, and is used to cut parallel to the grain. On both types, look for evenly set, sharp teeth set into a blade that's arrow-straight and tapered at the end.

There's one other important factor to consider, too. Unlike a power tool you can easily buy over the Internet, selecting a handsaw is a more personal matter. When done right, you'll be adding an heirloom to your workshop, one that feels balanced and comfortable in your hand. Shop around and saw the air with a few different models. You'll know when you find the one that fits [source: McKay]. 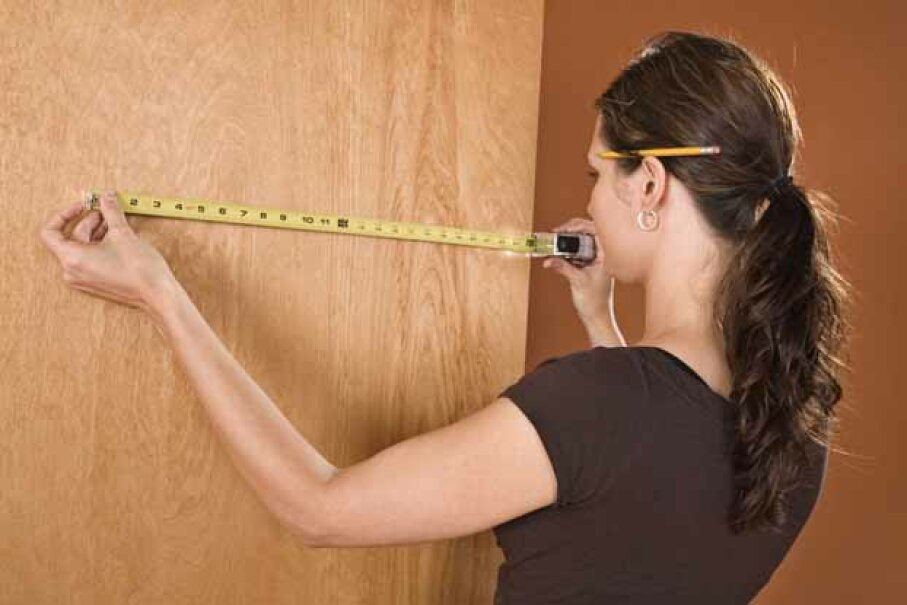 A quality tape measure should be able to extend for 6 feet without bending. FogStock/Thinkstock

Even today, you won't want to get caught without a retractable tape measure (or two) in your workshop. You'll need this tool for nearly every hands-on project you tackle. A quality measuring tape can last for years. Look for metal measuring tapes that will extend without bending for up to 6 feet (1.8 meters) with an L-shaped end that grips surfaces.

For most jobs, a 16-foot (4.8-meter) measuring tape will suffice, but 30-foot (7.6- and 9.1-meter) lengths are available, too. Whichever length you choose, make sure it has large and easy-to-read markings [source: Christopher].

Jackhammers offer incredible power when it comes to breaking down hard substances. Find out how these demolition marvels work.

Compared to the other presents I'd already opened at my bridal shower, this one was distinctive. It was a plain, white box with a single ribbon. Inside, was something I didn't expect: A hammer. It was a beautiful thing, with a wooden handle that felt like it was designed just for my hand. Arguably the most useful wedding present I received, the hammer was accompanied by a handwritten note from my dad.

Over the years, that hammer has come in handy. It has helped me hang pictures as a newlywed, then build a bench with my son or a bookshelf with my daughters. It's been useful, sure. But it was more than that, too. It was a connection to my dad. A girl needs that now and then, no matter how old she is.