The Agave, a type of cactus, are the American look-a-like of the African Aloe. Both have heavy, stiff leaves formed into basal rosettes and tall spikes of flowers. The greatest difference between them is in their way of flowering. 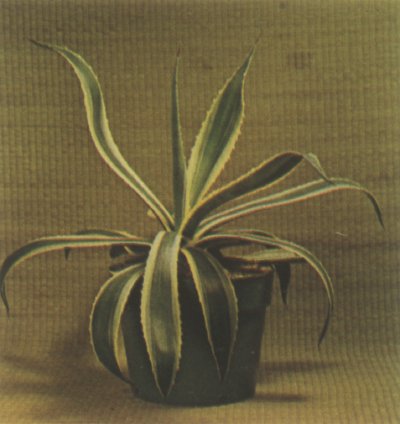 The flower stalks of the agaves develop from the growing point and those of the aloes grow from between the leaves. Thus, the agaves die after flowering while the aloes do not. Agaves are important in the production of fiber for rope and string. The sap is used in producing pulque, a beerlike drink (6 percent alcohol) and tequila, a distilled liquor (40 to 50 percent alcohol). Agave americana (century plant) originated in Mexico.

The fleshy, grey-green leaves in the rosette can sometimes grow four feet long indoors. Each rosette leaf ends in a sharp, needlelike spine. These natural needles, with the attached fiber, are used in Mexico to sew up heavy sacks. The century plant will grow many years before blooming when kept confined in a pot. There are several varieties of Agave americana. Agave americana Marginata has a creamy-yellow stripe on the edge of the leaf. Agave americana Medio-picta has yellowish stripes down the center. Agave leopoldii is one of the smaller, slower growing agaves. Its dense rosette is made up of light green leaves that have white stripes on the sides and fibers on the edges that curl up like fine shavings. Agave victoriaereginae is a compact rosette of thick, dark green leaves. The leaves are triangular in cross-section, have smooth, white edges and a blunt, dark spine at the end. This is a very slow growing plant. 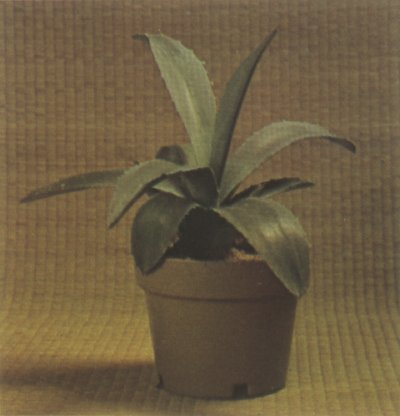 Caring for your cactus: