by C. Colston Burrell
Next 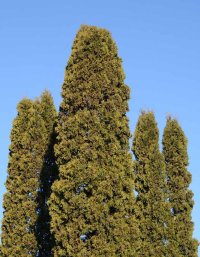 American arborvitae tree is one of the most popular of the conifer.

American arborvitae is a native to northeastern and central North America. This tree has become one of the most widely distributed of all conifers in culture and is grown in temperate climates throughout the world. It has given rise to innumerable varieties of various shades and forms.

Description of American arborvitae: This tree shows a narrow columnar form in youth, eventually broadening to conical at maturity. It is extremely slow-growing, especially under dry conditions, although it can eventually reach 40 feet in height. The bark is attractive and reddish brown but is only noticeable on mature plants, since young ones are clothed in foliage right to their base. Its persistent leaves are scalelike, forming flattened, horizontal sprays. They are dark green in the summer in the species, turning brownish green in the winter. Most selected forms, however, retain their green coloration all winter. The small cones are of little decorative use.

Growing American arborvitae: The American arborvitae is easily transplanted and grows in a wide range of soils, from moist to quite dry and acid to alkaline. It does best in full sun and should be watered regularly during periods of drought. This tree needs a humid atmosphere, so it is a poor choice for areas with dry summers.

Uses for American arborvitae: The tree is often used as a hedge or windbreak and can be pruned as needed. It is a good accent plant and has been widely used as a foundation plant.

American arborvitae related species: The oriental arborvitae (Platycladus orientalis) is similar but with vertical fans of scales, not horizontal ones. It is less hardy than the American form, but a better choice for warm climates. Thuja plicata is native from the Rockies west and forms an open, lacy crown to 80 feet tall.

American arborvitae related varieties: These are too numerous to mention. Some have an extremely narrow, columnar form; others can be shrubby or globular. They range in color from green to golden to variegated. 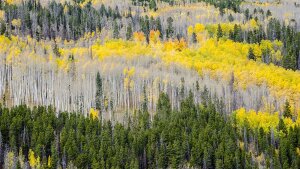