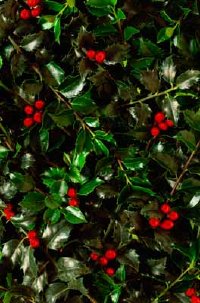 Amerian holly tree is an of evergreen trees.

American Holly is the best of the native evergreen hollies. It has been widely planted both within its native East Coast range and well beyond it, where it supplies cut branches for the Christmas decoration industry.

Description of American holly: The American holly is extremely variable, both in the wild and in culture. More than 1,000 varieties have been named. It is generally a slow-growing tree, reaching up to 50 feet in height (although dwarf, shrublike clones exist). Densely pyramidal in youth, it becomes more open with age. The leaves are typical of our image of a Christmas holly -- thick and dark green, with spiny edges. The berries are red and produced on female plants in the fall. They last through much of the winter, attracting birds.

How to grow American holly: Like many evergreen hollies, this tree is particular about its needs. It prefers deep, rich, well-drained soils, preferably acid, since it becomes chlorotic (yellowed) in alkaline soils. Partial shade or full sun are fine, but drying winds should be avoided. One male should be planted for every three females so fruit will develop.

Uses for American holly: Smaller clones are often used as evergreen shrubs and patio trees; standard size selections can become outstanding landscape specimens. The American holly makes an excellent privacy screen and security fence and can easily be pruned to hedge form. It also does well in city conditions as long as it is not exposed to strong winds.

American holly related species: There are many evergreen hollies, but few species are as adaptable as the American one. Among the hybrid types, the Meserve hollies (Ilex x meserveae) are particularly choice because of their great hardiness.

Oregon Grape
How can I tell if my backyard tree is diseased or dead?
Fast-Growing Trees