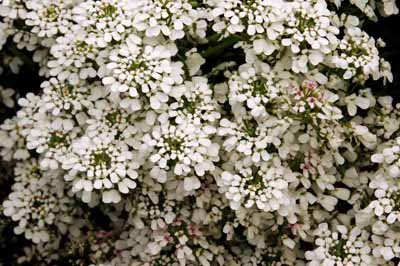 Annual candytuft, a depending on the variety. See more pictures of annual flowers.

Annual candytufts have flowers in white, pink, lilac, red, and purple. Where Iberis amara "blood" predominates, they're called rocket candytufts, since their growth is upright. Globe candytufts, with a more mounding form, emphasize the I. umbellata parentage.

Description of annual candytuft: Rocket candytufts have compact clusters of flowers on top of short, erect stems. In globe candytufts, the flower clusters are flat with a more bush-like appearance. Neither will grow more than 1 foot tall and usually remains compact.

Growing annual candytuft: Candytuft needs full sun and good drainage. The addition of lime to acid soils will improve the growth of candytufts. Plant as soon as the danger of frost is over. Space 6 inches apart.

Propagating annual candytuft: By seed. In mild climates, seeds can be sown in the ground in the fall for earlier bloom. Elsewhere, sow in the spring after the last frost. For earlier bloom, start candytuft indoors 6 to 8 weeks before planting out. Germination takes 15 to 20 days at 68 to 85 degrees Fahrenheit.

Uses for annual candytuft: Candytuft naturally grows as an informal plant. However, with shearing, it can be tamed to a more formal appearance. Plant candytuft in the front of borders or as edging of beds and borders. Grow it along sidewalks and pathways; tuck it into pockets in rock gardens; and display it in containers. The rocket kinds will have an erect growth habit, while the globe candytuft will drape over the edges, They combine effectively with other flowers in mixed plantings. The rocket candytuft can be used for cut flowers. Seed heads can be used for everlasting arrangements.