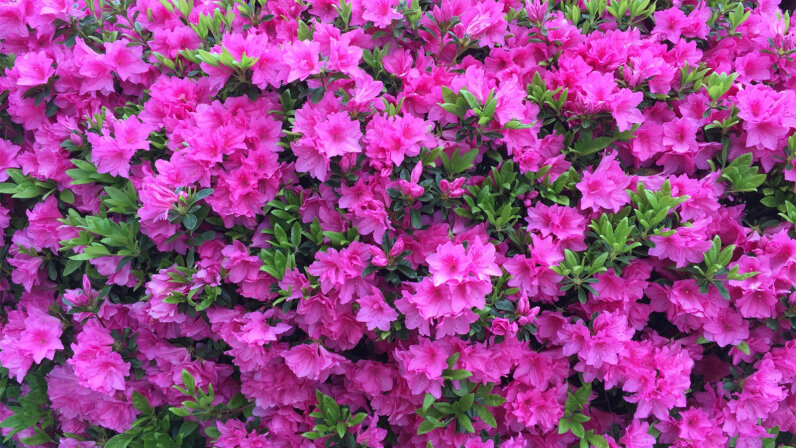 Try a free puzzle of this image!

Azaleas are one of the few plants, aside from annuals, whose blooms almost completely cover the plants, making them colorful standouts in the garden. prbabe/PxHere (CCO 1.0)

It's no wonder that azaleas have become synonymous with the Southern states in the U.S. After all, the dazzling pink, purple, red and white blossoms are on show worldwide for millions of folks to see during the popular Masters Tournament at Georgia's Augusta National golf course every year. Plus, one of the world's largest displays of native and cultivated azaleas — more than 20,000 of them — can be viewed each spring at Callaway Gardens in Pine Mountain, Georgia, which was originally developed in the 1950s after the owner, Carson Callaway, discovered a rare native azalea on the property.

These colorful plants originated in China and Japan, and made their way to the U.S. via England, France and Germany around the 1830s. The first American azaleas were planted on a plantation near Charleston, South Carolina, called Middleton Place Gardens, and have been associated with Southern gardens ever since. The oldest landscaped garden in the U.S., Middleton Place was created in 1741 by Henry Middleton using the design principles of Andre' Le Notre, who crafted the gardens at the Château de Vaux le Vicomte and Palace of Versailles in France. Among its highlights: a stunning view of blooming azalea gardens covering the hillside beneath the trees that is said to take your breath away.

Some other Southern spots to view these fabulous flowers: The gardens at Tryon Palace in New Bern, North Carolina, where azalea gardens can be found blooming in naturalized beds during the spring, along with thousands of tulip bulbs; Airlie Gardens in Wilmington, North Carolina, complete with 67 acres (27 hectares) boasting more than 100,000 azaleas; and Brookgreen Gardens, between Myrtle Beach and Pawleys Island in Murrells Inlet, South Carolina, where you'll find a former rice plantation sporting one of the largest collections of outdoor sculptures in the U.S. on 551 acres (223 hectares) surrounded by azaleas, camellias and live oaks.

So, why have azaleas become the signature flowers of the South? While these plants can be grown in many areas across the U.S., they prefer the moist, well-drained acidic soil and partial shade of the Southeastern U.S. "Due to their showiness and their adaptability to the climate — making them pretty easy to grow — they are popular in the region," explains Patricia Collins, who is now retired after serving 52 years as director of gardens, education and volunteers for Callaway Gardens.

Azaleas tend to be popular in the Southern region as ornamentals due to their evergreen leaves, adds Scott Fanello, editor of Totalgardener.com. "They offer beautiful flowers in the spring and deep green leaves year-round," he says. "Plus, the flowers virtually cover the bush, adding more color in the spring than almost any other plant other than annuals, which you have to replant every year."

Azaleas belong to the genus Rhododendron, while evergreen azaleas are in the subgenus Pentanthera and deciduous azaleas are in the subgenus Tsutsutsi. Azalea flowers generally have five stamens, and rhododendrons 10 or more. Azalea leaves exhibit hairs parallel to the leaf surface, usually along the midrib on the underside of the leaf, and tend to be thinner, softer and more pointed than rhododendron leaves. Azaleas flower along the sides of the stems, as well as at their ends, while rhododendrons usually flower only at the ends.

Meanwhile, they offer a wide variety of plant habits, sizes, colors and bloom times to meet almost every landscaping need or personal taste. All native North American azaleas are deciduous (which means they drop their leaves in the fall), with flower colors including white, purple, pink, red, orange and yellow. Evergreen azaleas, native primarily to Japan, have flower colors including white and various shades of purple, pink, red and reddish orange, but not yellow. Color patterns include single colors and bi-colors, as well as sectors, stripes and flecks, sometimes on the same plant.

Speaking of petals, these also fluctuate from thin strap-like petals to completely overlapping and rounded petals. Petal edges may be flat, recurved, wavy or ruffled. Leaves vary from as little as a quarter of an inch to well over 6 inches (15 centimeters) in length, commonly 1 to 2 inches (2.5 to 5 centimeters) for evergreen azaleas. While normally green, some plants have leaves with white or yellowish mottling or edges.

Plant habits of the different varieties range from stiffly upright, to broad spreading, to irregular. Plant height can differ from less than a foot to more than 15 feet (4.5 meters). A few evergreen varieties are weeping and may be grown as a hanging basket. Many varieties are dense and compact, others are quite open and some almost tree-like.

Are They Easy to Grow?

By making careful choices, gardeners in almost every part of the South can enjoy some of these plants, even if that means growing them in containers. Rhododendrons generally do better in the Upper and Middle South, although a number of selections thrive in the Lower South. Azaleas, however, are more accommodating, and with the necessary attention to soil, light and proper selection can be grown throughout the South.

"They are easy to grow, because they are accustomed to the climate in the Southeast," says Collins. "They are shallow-rooted plants, so you need to be sure to not plant deeply. Also be sure not to heavily hoe or weed around them, as you'll destroy the roots and harm the plant."

Fanello agrees that they are extremely easy to grow, adding that azaleas can be purchased from most local nurseries in pots. To grow them, he suggests the following steps (which he learned while working for a landscape company):

How Can You Extend Their Season?

According to the Azalea Society of America, these flowers needs generally need considerable shade (although some varieties do well in full sun, especially deciduous types); slightly acid soil (pH 5.5-6 is best, and is usually found under oak, pine and holly trees); and a mulch of pine bark, pine needles or wood chips to retain moisture in the ground, even out changes in the soil temperature and discourage weeds.

To avoid inducing new growth, which may be killed in the winter, the Azalea Society of America advises against fertilizing in late winter or early spring, and never after July 1. In addition, major pruning of azaleas should be done soon after they bloom to avoid cutting off next year's flower buds, while shortening or removing long slender stems with no side shoots and cutting out dead wood may be done at any time.

Finally, using a fungicidal spray, as needed in the spring as the buds show color, will control "petal blight," a fungal disease that shows up as discolored dots on the petals, and quickly discolors and collapses the blossoms.

Azaleas are perennial, so they'll come back year after year, adds Fanello. "You can extend the season," he says, "by planting late-blooming varieties, such as the pink "Sweet September," orange "Flame Creeper" ground variety or "Weston's Lemon Drop" that has peach buds that open into yellow flowers."

Now That's Interesting
Honey produced from nectar of certain types of rhododendron has hallucinogenic and laxative effects. Ancient Greeks and Romans were familiar with side effects of honey made of rhododendron.