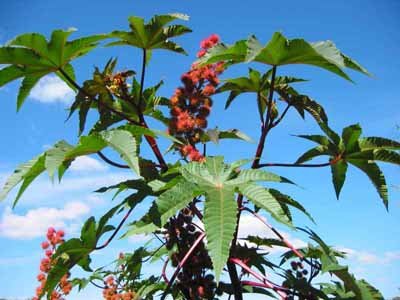 Castor bean brings great distinction to the garden quickly, growing to a large shrub of treelike proportions in a single season. The seeds yield an oil that is used commercially. The coats of the seeds contain ricin, a deadly poison. If there is any chance of their being eaten, break off the flowers. This native of Africa is naturalized in tropical parts of the world.

Description of castor bean: In the tropics, castor bean becomes a small tree. In areas with long growing seasons in the United States, it will reach 10 feet. The distinctive tropical character comes from the large, hand-shaped leaves that are up to 3 feet wide. Each one has from 5 to 12 deeply cut lobes.

Growing castor bean: Castor beans are indifferent to soil if they receive full sun, adequate heat, and plenty of moisture. In areas with long growing seasons, plant them directly in the ground after all danger of frost has passed and the ground is warm enough to germinate the seeds. In frost-free areas of Zones 9 and 10, they will live through the winter. Plant them at least 3 feet apart.

Propagating castor bean: By seed. Before sowing the seeds, soak them for 24 hours in water or nick the seed coat with a file. Start seeds indoors 6 to 8 weeks prior to planting in the garden. Start them in individual pots for transplanting.

Uses for castor bean: Castor beans are one of the most useful plants for shielding eyesores or providing temporary screens in the garden. They need lots of room; this plant is not modest in size. Side branches with flowers are cut to make attractive floral arrangements; the spiny seed-pods are used in dried arrangements. Some people have a skin reaction to the foliage and seedpods.

Foxglove: The Beautiful Bloom That's Good (and Bad) for Your Heart
17 Plants That Can Kill Your Cat and Why Poinsettias Won't
What's the most pet-friendly way to landscape?