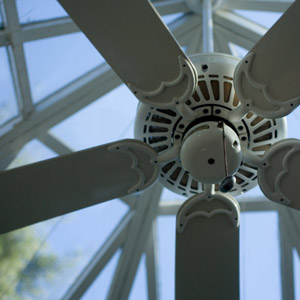 You arrive home from work on a summer day, bolting inside to escape the heat. You flip the switch on your ceiling fan, plop down on the couch, and breathe a sigh of relief as the cool air rushes over your body.

Does this scenario sound familiar?

Most people understand the general concept behind ceiling fans, but have you ever thought about what really makes them tick? What about how to choose the best ceiling fan to fit your style as well as save you money?

Since Philip Diehl's invention of the first electric ceiling fan in 1882, ceiling fans have evolved to become the most widely used and efficient cooling systems. Diehl eventually created smaller motors and added lighting kits to enhance his original invention. The style was a mix between a fan and a chandelier, called the Electrolier ceiling fan. The ceiling fan hasn't deviated much from the original idea, but the technology and style have progressed, creating the common household appliance that it is today.

So, whether you want to accent your room with a decorative fan, save money on your energy bill or make a room feel cooler or warmer (yes, you can warm yourself with a ceiling fan!), ceiling fans can do it all.

Continue reading to learn more about ceiling fans and how they can benefit you. 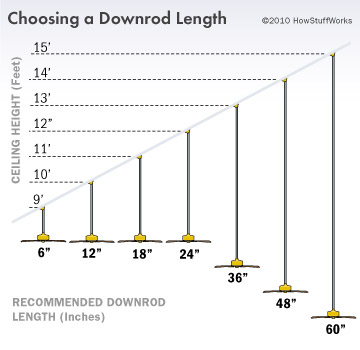 When selecting your ceiling fan, you first need to decide what room you want to install it in, whether indoors or outdoors. Choose rooms in your home that need more airflow, are considerably warmer throughout the year and are the most lived-in. The room will also impact the overall size of the fan you should buy as well as the accessories you'll need. For example, if you want to put your fan in a room with high ceilings, you might want to look for one that can hang from a downrod (a metal rod that will bring the fan lower to the ground), circulating the air more effectively in your living space. At right, you can see a chart showing you the appropriate downrod length in comparison to ceiling height.

Another thing to think about is the main function of your ceiling fan. Do you want to use it to make your room feel cooler or warmer, add extra lighting or just increase the ambience of your space? Depending on the desired function, you'll want to think about the number of blades, fan rotation and direction, speed settings and the types of accessories you'll need. The number of blades is purely aesthetic, but the rotation and direction of the fan can give you more efficient airflow depending on the slope of your ceiling. You can also add light kits, a downrod or even a remote control, which can be especially handy if you have high ceilings.

After choosing the room and function of your ceiling fan, the fun part begins: choosing the type of fan that fits the style and decor of the room. Find a fan that will fit your needs, represent you in your space and complement the overall style of your room.

All of these things will affect the price of your ceiling fan. Most ceiling fans cost between $50 and $150.

After you've chosen the fan that's perfect for you, you'll need to know a bit about installing it correctly. Read on to find out how. 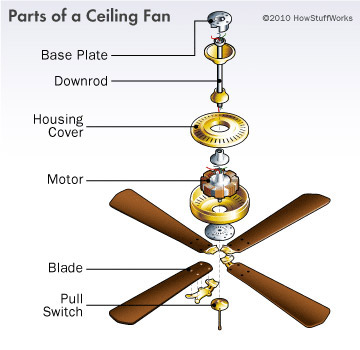 Although installing a ceiling fan will require that you work with electrical components, you can safely and easily handle it, especially if you're replacing an old fixture (when the wiring is already there, you'll have a lot less work to do). Just follow these simple steps. You may want to grab a friend as well, since the installation process is much easier with help.

Note: Installation steps and procedures may vary depending on the type of fan you purchase. Always consult the instruction manual.

Continue reading to find out what really happens when you turn your fan on.

Turning on a Ceiling Fan 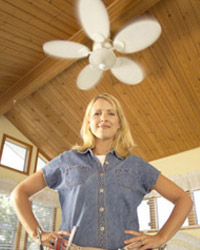 Once you finish installing your ceiling fan, you can cool yourself below it.
Brand X Pictures/Thinkstock

As you've already seen, ceiling fans are made up of a few basic parts: the base plate, the motor (with housing) and blades. So how do the parts actually work together to provide the cooling sensation that people love?

When you turn on your fan, electricity runs through the electrical wiring to the fan's motor, which begins turning the blades. The rotation of the blades creates airflow throughout the room. You can change the settings on the fan to create an updraft (air moving upward) or a downdraft (air moving downward), depending on the type of airflow you want. (A downdraft is desirable in summer, while an updraft is helpful in winter. But we'll discuss that in more detail later.) If a fan is accessorized with a lighting kit, it will typically have two pull cords hanging from the decorative casing, one for the fan and one for the lighting. When you pull the cord to turn on the lights, the electricity will travel the same way through the fan to the light bulb itself. These fans may also have two separate wall switches for each function as well.

The cooling sensation that you feel when you stand under a fan is also quite interesting. It feels as if the room is becoming cooler, but in fact, it's your body that is cooling. The reason it feels cooler is because the downdraft of air is actually helping to evaporate the perspiration on the surface of your skin and pushing away the body heat that you expel. So, when your fan feels like a cool summer breeze, it actually is.

Saving Money with a Ceiling Fan 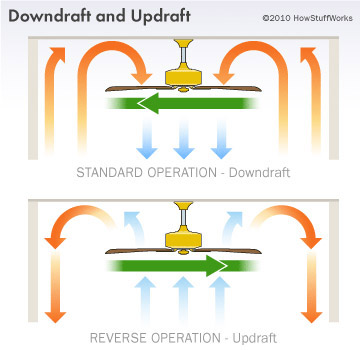 A ceiling fan can save you bundles of money on your energy bill since it uses less electricity than an air conditioner.

In default mode, fan blades turn and push air downward, creating a downdraft and making a room feel substantially cooler. However, some fans come with an option to switch the blade function to updraft. This function reverses the pathway of airflow, creating an updraft that mixes the cooler air from the lower portion of a room with the warmer air above. The mixed air is then pushed outward and back down the walls, which makes a room feel warmer. If you have high ceilings in your home, the updraft and downdraft function will be most useful to you, allowing you to circulate air that gets trapped at the ceiling through the rest of your room. The benefit of this is that you can raise or lower your thermostat a few degrees, depending on the time of year, without noticing a difference in temperature.

You'll also only want to use your fan when you're in the room. As discussed earlier, your ceiling fan doesn't actually make a room cooler. The cooling effect is felt on your body, not in the actual temperature of the room, so leaving your fan on in an empty room is a sure way to miss out on the energy saving aspects of having a fan.

The easiest way to clean your fan is to simply use dusting spray and a cloth. The dust may fall onto the furniture, so you may want to put down a drop cloth or sheet before starting.

You should do this every week or two to ensure that your fan continues to work properly. Every few months, you can also unscrew the fan's lighting globes and wash them in soapy water.

Regularly check your ceiling fan to ensure that all screws and bolts are tight. Over time, these tend to loosen up and can cause the fan to wobble or make noises. Also, lubricate your fan once a year to make sure that all of the parts are well oiled and will work together smoothly. 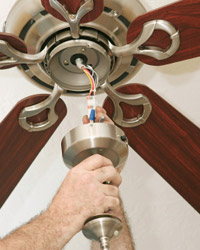 It's usually not difficult to troubleshoot problems with your fan.
©iStockphoto.com/lisafx

A ceiling fan is made up of numerous moving parts which often turn continuously for hours. Sooner or later, troubles will develop. But typically, those problems can be easily addressed.

Check out the links on the next page to find out more information about ceiling fans and other related topics.