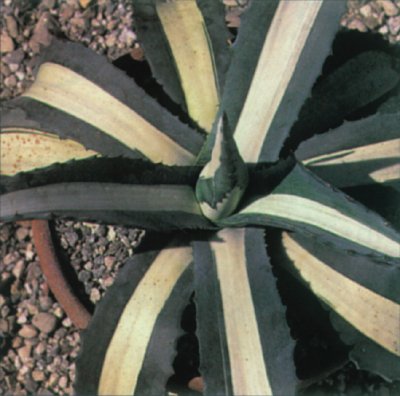 The spiky leaves of the century plant can grow up to five feet across. See more pictures of house plants.

The century plant is remarkable for its large (up to five feet across) rosette of fleshy, gray-green, sharply toothed leaves, each ending in a needlelike spine. Many cultivars are attractively striped in white or yellow.

Although the century plant dies after blooming, it can take thirty years or more to reach blooming size. Legend says it blooms only once a century, giving it its common name. Its size can be kept somewhat restricted by underpotting. Beware of its sharp spines when caring for this plant.

If I plant trees in my yard, will it offset global warming?
Cucamelon: Not the Love Child of a Cucumber and a Watermelon
How to Choose the Best Trellis for Your Garden