by Cherise Threewitt
Prev NEXT
2 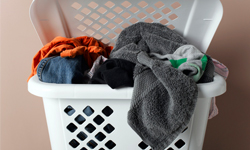 Do your laundry regularly -- you don't want your undershirts to turn into a den for bugs, do you?
Jeffrey Coolidge/Riser/Getty Images

Bugs like damp, dark places...especially silverfish, which are definitely things you don't want creeping around in your clothing. (They're flat, have antennae and a bunch of legs, and crawl fast. Like, unnaturally fast. They'll disappear deeper into your laundry pile before you're even sure of what you've seen.) But if you toss your dirties into a corner whenever you change your clothes, you're basically asking for it.

Fortunately, there's an easy fix for this one. Do your laundry regularly. As often as you can. It's time consuming and, at dorm prices, it's certainly not cheap. But it beats turning your undershirts into a den for bugs.

And in between loads, keep your dirty laundry off the ground. Even if you're dropping your socks to the floor as you crawl bleary-eyed into bed, take a few seconds the next morning to put them in the hamper. Don't step over them and leave them there; bend over, pick them up and put them where they belong. You might not want to touch them, but bugs are much less picky. And, while you're at it, get a hamper that sits a few inches above the ground, preferably on a metal frame.

Dirty towels are the worst offender. Even if you use your towels a few times before washing them (that's okay, you're certainly not the only one) at least take the step of hanging your towel on a hook or over the back of your chair to let it dry. Don't wad it up in a corner of the room, throw it on the windowsill, or kick it under the bed. You're just inviting nasty things to go nest in it. (Silverfish love wet towels. Again... gross.)

And if you're letting your towel sit around in what are probably the dirtiest parts of your room, you really shouldn't be using it again anyway. Just sayin.'