by Cherise Threewitt
Prev NEXT
1

In the battle for insect notoriety, bedbugs might just be the new cockroaches. Both have been around forever, but bedbugs have been seen as more of a threat in recent years. At least, in terms of breadth (how far and fast they've spread), depth (literally, how deeply they can infiltrate your home and your stuff) and longevity (it's really hard to stop a bedbug infestation once it starts). And also, less scientifically, in terms of grossness. Though roaches have also been known to suck human blood, it isn't their sole reason for existing, which we can assume only because they've been observed doing other things, like scurrying around.

So, bedbugs. They're enjoying a resurgence and are becoming increasingly resistant to traditional methods of eradication. Once an infestation occurs, the only ways to kill them are heat (washing every single thing you own in extremely hot water) and chemical extermination. They're especially threatening in a college dorm because they like densely populated areas. Contrary to popular belief, even a clean room can easily become infested in a multi-unit dwelling, since they easily and quickly move undetected from one area to another. (That's what scientific types call condos and apartment buildings, and for our purposes, it also applies to dorms. It also explains why hotels are prone to bedbug problems.) Bedbugs can travel nearly undetected along carpeted hallways or through hollows in drywall, and experts believe they often enter dorms by hiding in students' luggage during travel. That means even if you have good hygiene habits and keep your room clean, you're still at risk.

Bedbugs prefer to burrow in mattresses because they're dark and dense, and offer lots of seams, nooks and hidey-holes. Also, the proximity to a sleeping and unsuspecting human is not coincidental. Once a bedbug gets in a mattress, people usually believe the mattress is basically toast and beyond trying to save. It can be treated, but the process is expensive, doesn't always work, and there's no way to ensure it was successful, since bedbugs can burrow really deep where the chemicals and heat might not penetrate. There's finally an alternative, though: the bedbug-proof mattress cover. Don't balk at the price tag -- it's around 50 bucks or so. Just buy less expensive sheets if you have to make up a budget shortfall. This investment is much cheaper than the money, time and headache that would be caused by an infestation.

A high-quality bedbug mattress cover is made of a dense material that prevents the critters from burrowing or biting through, and it has special zippers that are designed to prevent anything from fitting through the grooves. It also prevents any bedbugs that have already nested in the mattress from finding their way back out (which is reassuring, yes, but also gross -- but no worries, mattress cover manufacturers promise they'll die within a year and a half). Any eggs that are already laid inside the mattress can't escape after hatching, either. So, though a bedbug-proof mattress cover won't kill bedbugs or prevent them from coming into your room at all, it'll discourage them from hanging out. And if you're lucky enough to have a box spring, go ahead and put one around that, too.

There might be bedbugs living in your school-issued mattress, waiting to die...but at least they won't be able to bite you.

Author's Note: 5 Ways to Keep Pests Out of Your Dorm Room

Here's an approach I do not recommend -- the old "college try" (by which I mean, doing nothing at all).

I had a pair of friends who roomed together all through college. Our sophomore year, they chose a gigantic double room in a building that was a hundred years old (the first building to be completed on our campus). It could be said that the building was kind of decrepit. These girls weren't exactly fastidious, either. So, one night, during a Super Smash Bros. session, I tried to ignore the quick, brown streak that appeared across the back wall, moving from one bed, behind the television, to the other bed.

"Nah," said the occupants of the room. The other guests appeared unconcerned.

A few minutes later, the rodent in question cautiously approached a two-day-old pizza box which was holding a few calcified slices. Vindicated!

One of my friends casually rose from her spot, gathered her bags of chips and crackers from the floor underneath her bed, and dumped them in a Tupperware tub. The pizza stayed on the floor, the Nintendo game continued, all eyes fixed straight ahead and the mouse remained in their room for most of the year. On the upside, there were remarkably few flies and ladybugs. 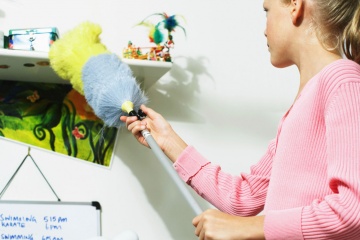