Should you keep your toiletries in your dorm room? 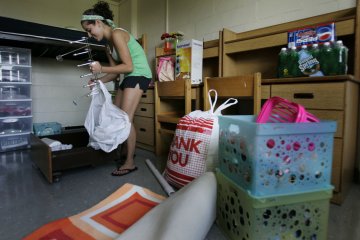 An undergraduate at New Jersey's Seton Hall University unpacks her gear for the year. The big question: Where is she going to stick her toiletries?
© Noah Addis/Star Ledger/Corbis

Ah, college. What a wonderful time. You're on your own. New friends. New adventures. No nagging parents. Parties and 24-hour pizza delivery. For many, it's a dream come true — until, that is, you walk into your dorm's communal bathroom. Suddenly, you realize life is a series of trade-offs. You must endure the pain (and smell) of the public restroom in order to enjoy your newfound freedom.

Your bathroom at home was comfortable, perhaps inviting. Lavender scents; soft, plush towels; roll upon roll of cushy toilet paper. You could sit or stand in complete privacy. Read a magazine. Take a shower. Comb your locks. Shave your legs. Quiet. Peaceful. Serene, even. Going away to college changes all that. Now you must share a public bathroom with a building full of strangers. Clogged toilets. Soiled paper towels thrown helter-skelter on the floor. Drips of who knows what by the toilet and sink. What's behind door No. 1? You don't want to know.

A dorm restroom (there's no rest about it), just like any other public restroom, is beyond gross. Faucets are fountains of filth. Toilets manufacture more germs than Detroit makes cars. Does flushing help? Get serious. Every time you flush, fetid water brimming with bacteria, mostly from feces, spits back up, landing on the seat, the rim, shoes and toes, toothbrushes and toothpaste tubes, soap and lipstick. Shall we go on? It wouldn't be so bad if all those germs were yours. They're not. They're Julie's and Mike's from down the hall. They're Aasma's and Sandeep's from the floor below, plus a few from that guy's girlfriend who's always hanging out.

Considering what we just told you, do you think it's safe to stash your toothbrush, razors and other toiletries in the dorm bathroom, or is your room a better bet? Before you answer, take a deep breath, hold your nose and read on. 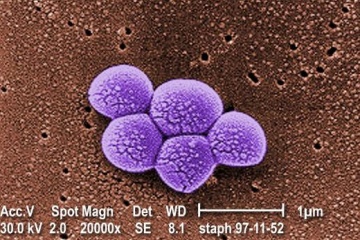 Meet MRSA, one of the floor residents that you might run into at the sink.
Image courtesy Janice Carr Public Health Image Library (PHIL)/CDC

Dr. Charles Gerba has spent a lot of time in the bathroom. The microbiologist from the University of Arizona is the world's foremost authority on organisms that live in and near the commode. He has spent part of his professional life studying how droplets from the toilet bowl migrate to other areas of the bathroom. Once he used a strobe light to shoot a time-lapsed photograph of what happens when a person flushes the toilet. He found that droplets of water rocket out of the bowl with tremendous speed, each laden with invisible bacteria and viruses. The take-home: Stash that toothbrush in the medicine cabinet [source: Marston].

Still, dorm toilets are relatively clean compared to the dorm shower. The latter are oversized petri dishes. A study conducted by the Simmons College Center for Hygiene and Health in Home and Community found that shower floors were the most contaminated surface in college dormitories. The shower, with its moist, humid environment, had more than 40 times the number of bacteria than the toilet seat. Forty-three percent of the shower floors that researchers studied contained fecal bacteria, while 20 percent were contaminated with Streptococcus,a spherical bacterium that can cause infections such as strep throat and scarlet fever [source: PR Newswire].

Other microbes lurk in the shower, too. Mold is extremely prevalent and problematic for those suffering from allergies, asthma or other breathing ailments. Other fungi can cause athlete's foot, skin infections, nail infections, and jock itch [sources: Centers for Disease Control, Fox News, Cigna].

If you think public showers are a no-man's-land of pathogens, you don't want to know what's going on at the sink, specifically the faucets. Thousands of different types of germs rest on the handles of sink faucets, including methicillin-resistant Staphylococcus aureus (commonly known as MRSA). Even electronic, non-touch faucets are cesspools. A Johns Hopkins University study found that half of the samples obtained from electronic-eye faucets were contaminated with Legionella spp., which causes Legionnaires' disease. Researchers speculate that parts of the electronic faucet might trap the bacteria, allowing Legionella spp. to multiply, grow and seep into the water supply and ultimately onto, or into, your body [sources: PR Newswire, Men's Health].

Public restroom floors — including the one in your dormitory — are filthy, too. Gerba, aka Dr. Germ, says about 2 million bacteria live on every square inch of floor surface. That's about 200 times more than a sanitary surface. And here's a shocker for you ladies, the sanitary napkin disposal unit can brim with germs, too [source: ABC News].

How to Survive the Dorm Bathroom 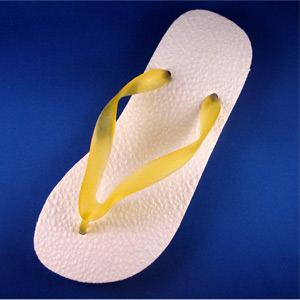 Leave no flip-flop behind, especially when you're heading for the dorm showers.
iStockphoto/Thinkstock

Now that you're completely grossed out, what can a college student do? If you're thinking about using your toiletries in your dorm room, remember that the average dorm room isn't exactly sterile. According to the Simmons College study, 56 percent of students said they never cleaned their dorm room fridge. So what? Consider that the handles of dorm room fridges have twice as many bacteria as the toilet handles in your shared bathroom. Researchers found the fridge handles were contaminated mostly with fecal bacteria [sources: PR Newswire].

Although there are plenty of bugs lurking in a dorm room bathroom, don't give up hope just yet. If you have a healthy immune system, and wash your hands often, you should be safe. Most disease-causing organisms, such as those responsible for certain sexually transmitted infections, cannot survive long on the surface of a toilet seat. It's tough for these critters to crawl up your urethral or genital tract, or even a cut on your bum [source: WebMD]. Good to know, eh?

Still, you need to store your shower caddy somewhere, and your filthy dorm room is the most convenient place. To help mitigate the damage, toss all your toiletries and makeup into the trash every couple of months. Most makeup contains preservatives that can kill ordinary bacteria. However, once you unlock the package, it's open season on Maybelline. Moreover, aging cosmetics lose their bacteria-fighting capabilities. Toss them when you think they're ripe. Clean your makeup sponges after every use. And never share makeup. You're just wiping another person's germs on your face. Skin care products and body washes have a six-month shelf life. Ditch them earlier if you're afraid of bathroom microbes. In addition, wash your hairbrushes a couple times a week with soap and water. Shave with disposable razors.

At the end of the day, use your common sense. Respect others. Clean up your messes, and for goodness' sake, flush. Just stand back.

Author's Note: Should you keep your toiletries in your dorm room?

I'm not a germaphobe, but public restrooms make me what to vomit. I think it started in college. Heck, I think they only cleaned the place once a month. I flush with my feet. Only in extreme cases do I sit, and if I do it's with a Berlin Wall of toilet paper between me and who knows what. I step gingerly around the pools of liquid, especially by the urinals, and always make sure the laces on my sneakers never touch the floor. I know, too much info. Men's rooms are bad, but according to studies, women's rooms are worse.