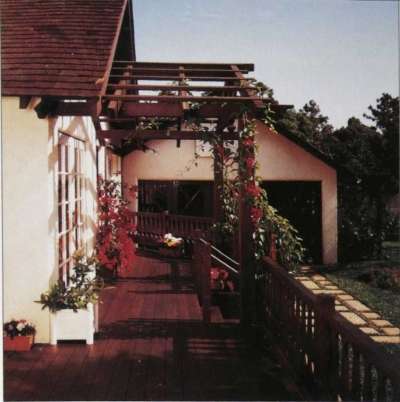 ©California Redwood Association The timber-framed overhead structure mimics the roof shape, defines the stairway from the yard to the door, and helps visually tie the house and deck together.

Consider the style of your home before adding a deck onto it. For instance, in the early 20th century, a number of traditional architectural styles were revived all around the country. Many of these designs were rooted in certain periods of history, both American and European. One of the more popular period styles was the Tudor, usually a simplified version of the Elizabethan house and distinguished by its stuccoed or stone exterior, exposed half-timbers, and small leaded windows.

The redwood deck addition shown here blends handsomely with the picturesque style of the Tudor home. The gabled structure above the French doors echoes the shape of the roof lines, its timber-frame construction also a reminder of the Tudor's characteristic half-timbers.

©California Redwood Association Artistically wrapped with a redwood surround, the built-in spa features a curving bench that also serves as a step for easing in and out of the water.

Neatly wrapped with redwood siding, the well-integrated deck design visually anchors the house to the ground and gives presence to a sideyard that was ignored before. Dark-stained surfaces tie in with the house trim and the shingled upper walls and give the deck a more traditional look.

©California Redwood Association The beautifully crafted elements of this redwood deck complement the styling of this Tudor home. The balusters of the railing carry a whimsical heart motif.