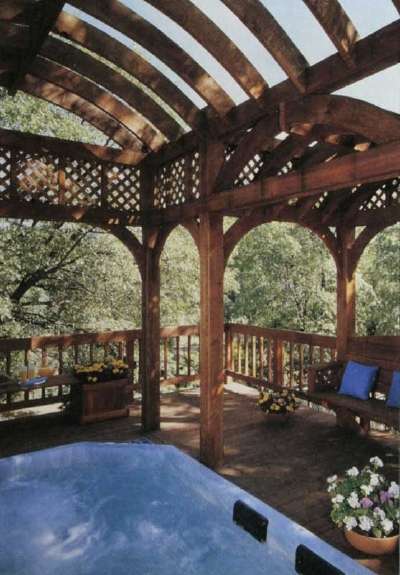 ©California Redwood Association The central attraction of this multilevel deck is an octagonal spa. Benches can be pulled close to the spa's edge so people can dangle their feet in the water.

Whether you think of a soak in a spa as therapeutic or just plain fun, integrating a spa into a deck idea can be accomplished with relative ease. Unlike swimming pools, spas take up little room and can be incorporated into small-space decks tucked into a tight corner or a narrow sideyard. They are most enjoyed when located in a quiet spot not too far from the house, shielded from wind and neighbors.

Although the typical spa lies nearly flush with its surround, it can be designed to rise above the floor, hot-tub style. Despite appearances, spas and hot tubs are seldom supported by the decking itself; they usually rest directly on the ground or on a portion of the deck substructure. Since they are not structural, deck surrounds can be laid out in countless ways to create dramatic floor patterns, accentuate the soaking area, or simply echo the shape of the spa.