Enhancing the Home with Levels 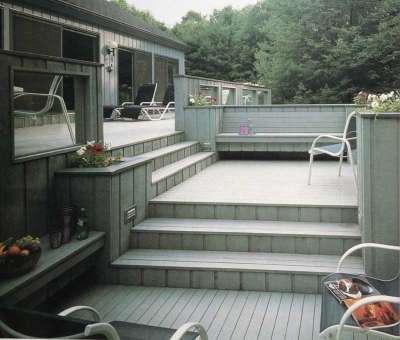 ©Peter C. Kurth, AIA An integral part of this home's design, the deck's descending levels exhibit the same contemporary styling, color palette, and aesthetics as the house itself.

Multilevel decks aren't always employed to solve site problems; often they serve as enhancements to both house and garden. Frequently, multiple levels are designed as an integral part of a home's architecture to extend the building and your deck ideas into the natural surroundings in a gradual and pleasing way. Sometimes they set the stage for a particular style of landscaping or act as bridges or connectors within the landscape. A very large deck has a warmer appearance when broken into levels and is usually in better proportion to the scale of the house.

Built-in planters and seating can be incorporated to help signal a change in levels, and if positioned properly, they can even take the place of conventional rails. Multiple decks also lend themselves to interesting patterns that can be repeated on other levels -- changing the direction of the floorboards on steps, for instance, shaping corners on the diagonal, or implementing horizontal railings rather than traditional vertical designs.