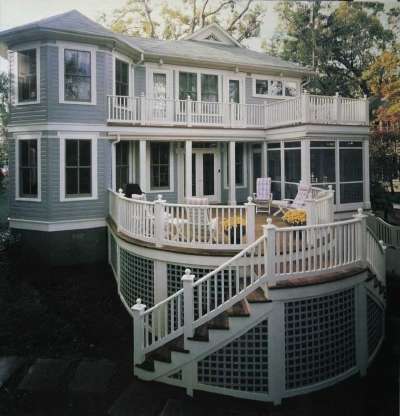 ©California Redwood Association Blending in with the Victorian style of the house, this raised semicircular deck adds visual interest with a pair of curved stairs that hug the bow of the deck.

For a house that's built on a virtually level site, gaining an outdoor living area can be a relatively simple matter; an on-grade deck that lies flush with the ground or a concrete or stone patio could be just the right deck idea. But few sites are perfectly flat, and the solution invariably calls for a deck that's raised off the ground on a system of posts. The term "raised" is rather broad since it encompasses nearly all types of decks that are not built directly on the ground. A raised deck can float a foot or so above grade -- perhaps just enough to bring the deck floor up to the same level as the threshold of the back door. Or it might extend several feet from the ground to be on the same level as interior rooms, then gradually step its way down a slope. A raised deck can be a freestanding structure out in the yard or a wraparound element attached directly to the house.

Decks built close to the ground usually require a relatively simple support system. More expansive or complicated decks, as well as those that sit above the ground, demand a substructure engineered for stability and bearing loads.