Contemporary Drama in a Deck 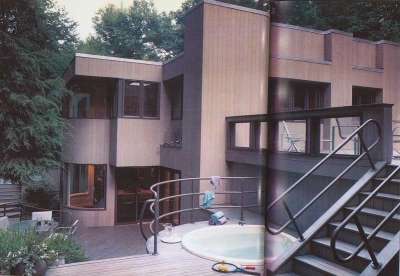 In this design -- an architect's own home -- strong vertical and horizontal surfaces are softened by a curving wall, which is echoed in the curve of the midlevel deck and handrails. The fluid lines of the metal railings carry a nautical theme inspired by a pond that sits near the base of the deck.

The open framework of the metal rails and the clear plexiglass inserts of the upper deck wall allow unobstructed views of the surrounding trees and vegetation whether sitting, dining, or soaking in the spa. The plexiglass also serves as a safety measure, keeping children and their toys safely contained. The nautical theme also influenced the color scheme of the house and deck design -- a driftwood gray on walls, a darker shade to accent trim and railings, and a waterlike blue-gray on the deck.