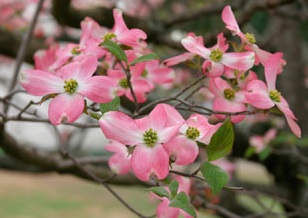 Dogwood is a native of the eastern United States and is one of the most popular flowering trees. A medium-sized deciduous tree (20 feet in most areas), it has large white or pink blooms, which appear all over the tree before the leaves emerge, making a spectacular display. The leaves turn bright scarlet in the fall, and the red berries are a good food source for birds.

How to grow: The flowering dogwood grows best in a rich, acidic, well-drained soil in partial shade or full sun. It will not tolerate prolonged drought.

Related species: Cornus kousa is later flowering but just as showy. Summer Stars has flowers that last nearly two months in late summer. C. mas is the cornelian cherry, with earlier but less showy blooms than C. florida. Its red or yellow fruits are edible.