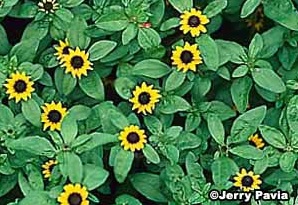 Sanvitalia is an annual flower that although not a true zinnia, has enough resemblance to be called creeping zinnia. Golden-yellow flowers bloom nonstop all summer until frost.

Description: The plant is a creeper, reaching to 12 inches in diameter with flowers above topping out at 6 inches. The flowers aren't large, but they're so abundant that they nearly obscure the foliage.

How to grow: Sanvitalia prefers full sun but will adapt to partial shade with less flowering. It is tolerant of most garden conditions. Plant outdoors when all danger of frost has passed and the soil is warm. Space plants four to six inches apart.

Propagation: Sow seeds in place when ground has warmed. For earlier bloom, start indoors four to six weeks before outdoor planting. Seeds germinate in 10 to 15 days at 70 degrees Fahrenheit.

Uses: Use it as an edging for the front of borders, along sidewalks and paths, and in rock gardens. Sanvitalia trails well from containers.