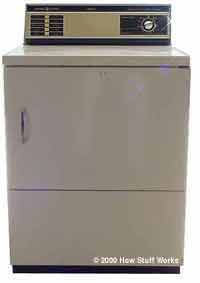 How much do you know about clothes dryers?
HSW

A clothes dryer can be found in just about every house in the United States, and millions more of them are manufactured each year. They are very reliable, and very cheap to build. You'll be surprised at how simple this common machine is. Clothes dryers have:

In this edition of How Stuff Works, we'll take apart a clothes dryer and explore how each system works. We'll start by following the air through the machine, then see how the tumbler and fan turn, and finally we'll look at the controls.­ 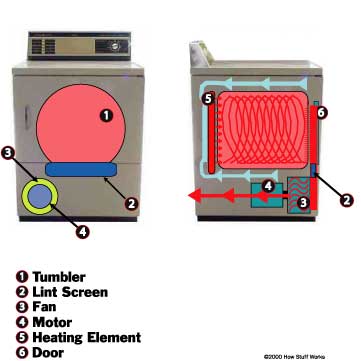 You may know that the warm, moist air leaves the dryer through a hole in the back, which is usually hooked up by a pipe to a vent on your house. But where does the air enter the dryer?

In brief, this is how the air makes its way through the dryer:

The air is drawn through the heating element and into the holes in the back of the tumbler.

The metal stamping on the right, with the big holes in it, makes sure that air can enter the tumbler only after it has gone through the heating element.

The hot air now makes its way through the clothes in the tumbler, and then into the holes in the door.

The air passes through the holes in the door, and out through the big slot in the bottom of the door which leads to the lint screen.

The air is drawn through the lint screen and down a duct in the front of the dryer, where it enters the fan.

The fan is a centrifugal type of device -- as it spins, it flings the air to the outside, sucking air from the center and forcing it out the duct at the back of the dryer. In the next section we'll see what makes the tumbler spin. 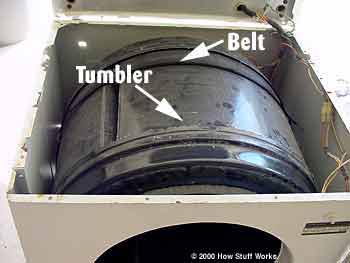 If you open up a dryer, one surprising thing is the lack of any gears on the tumbler. It turns out that the tumbler is one giant gear (or actually a pulley), and the motor drives a tiny pulley. Because of the ratio between the huge tumbler diameter and the tiny motor pulley diameter, no other gears are needed!

You can see the thin belt wrapped around the tumbler in the picture above.

The same electric motor drives both the fan and the tumbler. The pulley for the tumbler belt is hooked up to one output of the motor, and the fan is hooked to the other. 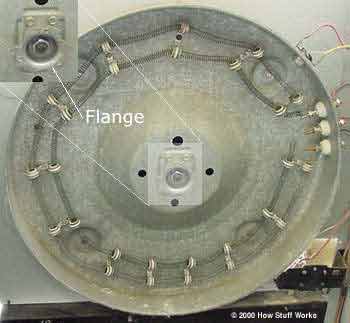 Another funny thing about most dryers is that the tumbler has no bearings to help it spin smoothly. So what supports the weight of the clothes?

The front of the tumbler rides on two white plastic pads that are mounted to the top of the support structure. 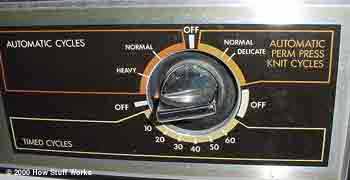 This dryer has no electronics in it at all. Instead, a system of gears, cams, electrical contacts and motors forms a sort of mechanical computer. Let's start by looking at the cycle control knob.

By turning this knob to various positions, you can control both the type of cycle and the length of time it runs. Let's take a look at what is inside this switch.

Here is a view of the back of the cycle switch. Attached to the back is a little motor. The picture below shows the motor unscrewed from the switch.

The tiny gear on the motor turns very slowly; and it engages a bigger gear inside the switch that makes the switch turn even slower.

Inside the cycle switch

The motor turns the gear on the dial, which is connected to a set of four cams stacked on top of each other. Each of the cams engages one of the four contacts in the switch.

Inside the cycle switch box

Each of the four contacts has a bend in it, and each bend is located at a different height inside the box. Starting with the bottom left contact, the heights increase in a counterclockwise manner; the bottom left contact is the lowest, the top left contact is the highest. A different cam engages each of these contacts. In the pictures below, you can see the four cam layers; each of these layers corresponds in height to one of the contacts. 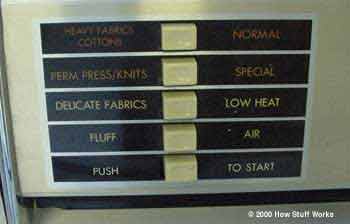 This set of buttons controls the heat settings for the timed dryer cycles.

If you press any of the top four buttons, they stay depressed. If you then press a different button, the first one pops up, and the new button stays pressed in. A really neat set of plates that work like the tumblers in a lock make this feature possible, and also control which heating elements are engaged.

Inside the heat-setting switch

Inside the switch are a set of four contacts. Depending on which button is pressed in, the plates open or close various combinations of the contacts. The following set of pictures illustrates how pressing the buttons causes the plates to line up in different ways, raising or lowering the bars that make the contacts. 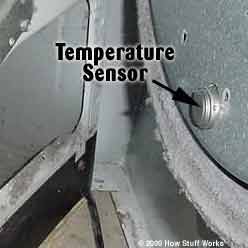 The dryer also has a couple of safety features that help to prevent overheating. There are two temperature shut-off switches. When these switches reach certain preset temperatures, they break contact, which shuts the dryer off. The first switch is located near the lint screen.

The picture above shows the front of the dryer, with the front panel partially removed. The first temperature sensor is on the right. And to the left, you can see a set of six holes in the outer edge of the tumbler. These holes are only there to blow hot air on the sensor every time they go by. If the temperature in the tumbler gets too hot, this sensor cuts the power, shutting the dryer off.

But what happens if the belt breaks and the holes don't happen to be in front of the temperature sensor? Or if the fan gets clogged and no air is coming out of the tumbler? This is where the second temperature switch comes in.

The second sensor is located close to the heating elements. If airflow is shut off for any reason, the air near this sensor will quickly heat up to the temperature that triggers this sensor, and the sensor will shut off power.