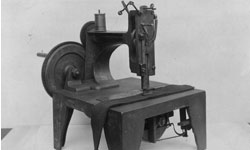 The sewing machine that built a castle -- a Singer from 1854.
Rischgitz/Stringer/Hulton Archive/Getty Images

It was 1896 when Commodore Frederick G. Bourne decided he needed a summer home and hunting lodge. As the president of the Singer Sewing Machine Company, he had the money to build a five-story castle on Dark Island in the St. Lawrence River of New York. And what's a proper summer home and hunting lodge without an icehouse that facilitates turn-of-the-century entertaining, a library to hang the heads of your game trophies, and of course, secret passageways and a dungeon?

In Bourne's lifetime, the castle was known as The Towers, but in recent years has been renamed Singer Castle. Unlike some of the more nefarious purposes that hidden passageways serve in the other homes on this list, Frederick Bourne apparently had a very simple reason for wanting them. Like many of us, Bourne wanted to know what his guests really thought of him, so his secret passageways allowed him to subtly escape a gathering to spy on the party.

If fellow self-made millionaires Cornelius Vanderbilt and Vincent Astor were over, Bourne might have slipped through one of the wooden panels in the library to access the stone spiral staircase. From a floor above, he could sit in a corridor and peer through a metal grate at his visitors. From that height, no one would have noticed if a large painting on the wall suddenly tilted a bit; Bourne would have pushed on it to listen in on the chitchat below [source: McCarron]. If Bourne wasn't in the mood for eavesdropping, a hidden passage also led to the wine cellar.

Remember those nefarious purposes I mentioned earlier? Click ahead to read about the hidden passageway that allegedly allowed one homeowner to have countless affairs with Hollywood starlets.