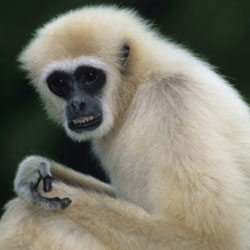 It can be hard to find the right room for your gibbon.
Anup Shah/Photodisc/Getty Images

Wolf's Lair Castle in Hollywood, Calif., was named for its designer, art director L. Milton Wolf. Wolf wanted a replica of a Norman castle, complete with a turret designed especially for his pet gibbon [source: Pavlik]. In addition to the gibbon's dwellings, there are eight bedrooms and six bathrooms between the main house and the guest house, as well as a heart-shaped pool and a speakeasy. The house was constructed in 1927, so the speakeasy provided a quick refuge during the bans of Prohibition.

From Wolf's Lair Castle, you have an incredible view; you can see downtown Los Angeles, Catalina Island and the famed Hollywood sign. What you won't see is the hidden passageway between the main house and the guest house. According to the gossip of the day, Wolf put a secret apartment beneath the guesthouse so that he could indulge his taste for young Hollywood starlets [source: Brenoff]. The womanizer would take the secret passageway to meet his dates while his unsuspecting wife snoozed only a few hundred feet away.

In June 2008, the property went on the market for $7.5 million, but musician Moby bought it for just $4 million in 2010 and then put about $2 million in restorations into it [source: Wadler]. It was likely a better buy than the next eccentric home on our list, which has passed hands many times over the years due to a little problem with ghosts. Find out who might have used his secret passageways to carry out murder on the next page.