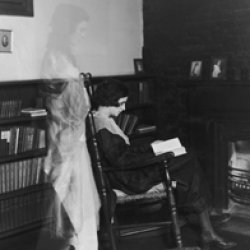 Could you live with the ghosts of murdered women?
FPG/Hulton Archive/Getty Images

Nothing earns a home the reputation of eccentricity quite like rumors that it's haunted. So we come to Franklin Castle, in Cleveland, Ohio, which was built in 1865 by a German immigrant named Hannes Tiedemann. Tiedemann had done quite well in various businesses that included barrel-making, banking and grocery stores, so he spared no expense in building the home for his wife. Once in the home, the family quickly grew to include several children.

Then the children began to die. As the whispers started circulating through town that perhaps there was more to these deaths than met the eye, Tiedemann decided to build on to the house to distract his wife from her grief. Apparently Tiedemann thought that what his wife really needed were features like turrets and gargoyles, which made the home look even more like a castle. He put in hidden passageways and secret rooms all around the house, as well as a ballroom that spanned the entire length of the structure.

But the redecoration didn't stop the deaths. One legend has it that Tiedemann hung his teenage niece from the rafters in a hidden passageway off the ballroom, either because she was insane or promiscuous [source: Taylor]. Tiedemann may have also murdered a servant on her wedding day because she would not return his amorous advances [source: Lane]. Their ghosts may haunt the home. The only decent use of the passageways may have been by Mrs. Tiedemann, who used them to visit with her children away from the ill-tempered Mr. Tiedemann [source: Lane].

The weirdness didn't stop with Tiedemann, though. The home was later used by the German Socialist Party. It's said that the voices sometimes heard in the halls might be those of the 20 party members who were supposedly gunned down in one of the secret rooms. When the home was used as a boarding house, one occupant found a secret room that contained dozens of skeletons of human babies. A doctor could only conclude that the bones were indeed human and very old, but some speculated that they had been victims of botched medical experiments [source: Taylor].

Franklin Castle has passed through the hands of numerous owners since the 1960s, some of whom have complained about troubles with ghosts and odd occurrences. But any odd occurrences at the next home on our list were probably manufactured by its owner. Turn the page to find out about the ultimate in haunted houses.