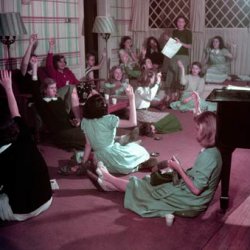 Are these Smith students voting on how scary Sessions House is?
Peter Stackpole/Stringer/Time & Life Pictures/Getty Images

As a residence hall on the campus of Smith College, in Northampton, Mass., Sessions House has probably seen its share of eccentric student behavior over the years. But even the wildest college parties pale in comparison to the illustrious history of the home.

The house was constructed by Captain Jonathan Hunt in 1710. To provide protection from the local Native Americans, Captain Hunt installed a secret passageway in the home as a family hiding spot. But Captain Hunt's granddaughter Lucy used the passageway for a different purpose. When she fell in love with a Revolutionary War soldier, she arranged for their meetings to take place in the passageway. The family disapproved of the relationship, and though the soldier promised to return to marry the girl, he never did. It's said that the lovelorn ghosts of this couple still wander the halls, looking for each other [source: Smith College].

Each year at Halloween, the new residents of Sessions House try to find the secret passageway. All the lights are turned off, and the students have 20 minutes to search for the meeting spot of the star-crossed lovers. One sinister clue that might lead the way is the sound of two previous students. It's said that you can hear two girls who found the secret passageway one Halloween, only to fall through a hole on a staircase. The students allegedly either broke their necks or were so badly injured they couldn't move, eventually dying of starvation [source: Belanger]. If this story is true, it seems more likely that the girls broke their necks; surely the hidden passageway wasn't so hard to find that the other students wouldn't have come to their classmates' rescue when it was discovered the girls were missing.

While it's possible that the hidden passageway was used to transport slaves on the Underground Railroad, some of the home's other visitors haven't been so lucky. Before the home was given to the college, legend has it that a woman with two young children was staying in the house. The mother thought she heard intruders, so she took an axe and searched the house. She mistook her children for the intruders, however, and killed them. When she realized what she'd done, she killed herself [source: Belanger].

No word on whether Sessions House features a hidden passageway to the Sessions Annex next door. For a few years in the 1970s, the annex housed male students studying at Smith through exchange programs. Certainly a few students at the all-female Smith would have appreciated such a feature.