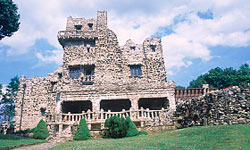 The 24-room Gillette Castle was built high on a cliff above the Connecticut River in 1913 by William Gillette, a successful stage actor renowned for his role as Sherlock Holmes. The East Haddam mansion, which has been described as "ugly, excessive and weird" and "designed to resemble a ruined European castle," is made of fieldstone blocks, which were hauled up the mountain by tramway, and was modeled after the medieval castles of Germany's Rhineland [sources: Monagan, Old House Journal].

You might say the actor and playwright designed his eccentric home to operate somewhat like the stage. For example, Gillette installed mirrors above the windows in the living room and in his bedroom so he could monitor his guests as they filed into his house and time his grand entrance down the carpeted staircase perfectly. Likewise, the house also enabled him to make a timely exit. In his private study, he installed a trick door through which he could escape to his workshop if an unwanted guest burst onto the scene.

Gillette liked to spy on his guests, which was done via a hidden staircase and hidden room, as well as through his mirror system. He also liked to wow them with the home's quirky features. These were Prohibition times, so Gillette designed his bar to lock and disappear in an instant, and it could only be reopened by pushing a secret lever in the back. At parties, Gillette enjoyed using his mirror system to watch his guests return to the bar for a refill, only to fumble around aimlessly for the lever.

The eccentricities didn't end there. In his dining room, the table was on a track. Guests sat on a bench along the wall, and the table would roll toward them and lock into place. When Gillette wanted dinner service, he'd push a floorboard with his foot to ring for assistance. Throughout the home, cat-sized openings were built into the walls, so felines could easily navigate the quarters, and outside the castle, a full-scale train cruised the 125-acre estate [source: Vorhees et al].

In Gillette's will, he stipulated that he didn't want the property to be sold to "some blithering saphead who has no conception of where he is." He died in 1937 at the age of 83, and in 1943, the state purchased the land for $30,000 to turn it into a state park [source: Monagan]. In 2002, the quirky castle was renovated for about $5.9 million and opened to the public [source: Old House Interiors].