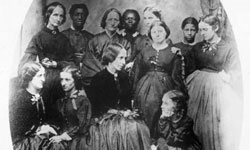 You'd think with a name like the Coffin House, this residence would be frightening. But nothing could be further from the truth.

In the pre-Civil War years, Levi and Catharine Coffin weren't happy in North Carolina because the married Quaker couple abhorred slavery. They decided to move to Newport, Ind., (now called Fountain City) to be near others who shared their values. They opened a general store and planned to build a new home, but not just any home -- the new home was designed specifically to be a safe house for slaves seeking freedom along the Underground Railroad.

Indiana was a free state, but it was a federal crime to hide runaway slaves. The house, therefore, had to have secret spaces where the slaves could hide until those seeking them had come and gone. A room in the back of the house had five different doors, so if any slaves had to exit quickly, there were plenty of routes.

The house had several secret areas, too, most notably a tiny and cramped cubbyhole off a bedroom where slaves stayed for as long as two weeks, hiding from harm and resting before embarking on the rest of their journeys. One of the slaves who hid inside the small cubbyhole was named Eliza, and the account of her experience was included in Harriet Beecher Stowe's novel "Uncle Tom's Cabin."

The Coffins are said to have hidden more than 2,000 escaped slaves during their time in Fountain City, and every one of the slaves the Coffins assisted eventually reached freedom [source: Indiana Insider Blog]. For his accomplishments, Levi Coffin was nicknamed the "President of the Underground Railroad."