by Heather Kolich
Prev NEXT
4 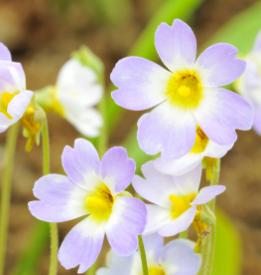 As innocuous looking as it sounds, the butterwort hides a slippery secret in plain view. Lip-like flowers with a spur end (that probably inspired "Little Shop of Horrors" screenplay writer Charles B. Griffith) rise on simple stems several inches (centimeters) into the air. But this small plant's deadly secret isn't its hungry-looking bloom. The real danger lies in the slick, tongue-shaped leaves that nestle close to the ground.

Pinguicula means "little greasy one" in Latin, and the leaves do have a greasy feel. Strangely, the greasy substance is glue, secreted by thousands of nearly invisible glandular hairs. These glands work to secure insects; a secondary gland comes into play once a bug is caught. The sessile glands exude acids and enzymes that coat the insect and dissolve its soft parts. The leaves of the butterwort are slightly upturned on the edges, and some temperate climate species can increase the curl while the plant is digesting prey. It usually only happens when the plant is dealing with larger insects. Researchers don't think this slight movement has the same function that leaf movements in the sundews have; instead, it probably serves to keep the abundance of digestive juices from dripping off the edge of the leaf before the plant can reabsorb them. A deep pool of juices is more effective for digesting large insects, and loss of the juices would also mean loss of the nutrients dissolved into them.

Butterworts or "pings" exist in most reaches of the Northern Hemisphere, with the most spectacular species being found in Mexico. There are about 70 species, many only recently discovered [source: D'Amato]. They typically have a circular, rosette form measuring a few inches (centimeters) in diameter, and they may have a musty or earthy smell. The flowers bloom in spring and can last for months. Depending on the species, flowers are funnel-shaped, cupped or flat, and some have beards. There is only one butterwort, P. laueana, that's known to have reddish flowers; most bloom white, pink, purple or yellow.

Pings are popular and easy-to-grow houseplants. You can start them from seeds or buds, and Mexican varieties will root from leaf cuttings. All pings need perpetually moist soil and have a dormant or semi-dormant period in the winter. Put them outside for warmer months so their pollinators, hummingbirds and long-tongued insects, can get to them. And don't forget to feed them when they're indoors. Their natural prey can be supplemented with fruit flies, ants and dried insects.

Butterworts fascinate botanists all over the world. One of the foremost researchers, S. Jost Caspar, was trapped in East Germany until the Berlin Wall was torn down in 1989. Shortly thereafter, scientists interested in Pinguicula formed the International Pinguicula Study Group. Their mission was twofold: to study and share information about the carnivorous plant, and to promote its popularity as a house and garden plant. The study group persisted, publishing sporadic newsletters covering discoveries, editorials and cultivation tips, until 2000.