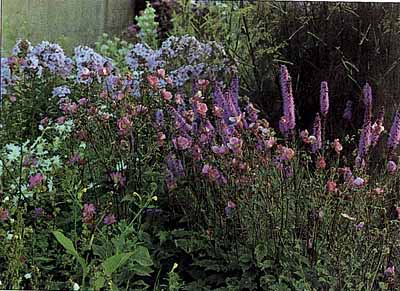 English country gardening with perennial plants can be particularly rewarding, as they return to greet you year after year. Whether a flower bed full of perennial blooms is the focus of your garden or one of many features, the garden photos that follow, along with the perennial beds and border ideas, should give you great garden ideas to spark your creativity.

Using purple as the primary color, this garden brings together a great many species. A richly overflowing border of country flowers presents drifts of bloom in variations on the lavender shade, including generous numbers of liatris, anemone, and phlox.

Also unified by purple hues, this more formal English country garden backed by a stone wall adds sparkle to the theme with the addition of yellow and white. This garden boasts perennials including platycodon, Shasta daisy, achillea, veronica, and astilbe.

The widespread interest in horticulture and botany during the nineteenth century led to the practice of mixing tropical exotics with more familiar annuals, shrubs, and perennials. Tall-flowering cannas such as these, brought to England from India during the heyday of the British Empire, are now familiar to gardeners all over the world. Cannas and other tropical plants are tender and should be lifted in the autumn and kept indoors until spring, when they can be replanted.

"England is a garden that is full of stately views," wrote Rudyard Kipling, and although this particular view is located in Chicago (above), it demonstrates that the mixed-planting principles of traditional English country gardening may be applied in many different locales. Perennials including liatris, white coneflower, yarrow, and veronica mingle with annual cosmos, pansies, and zinnias and offer ample material for fresh bouquets.

If you prefer a bit more order -- and perhaps even a pattern -- among your blooming flowers, continue to the next page for some fine examples of the oh-so-English country garden tradition of carpet bedding.

If you're feeling inspired by the English countryside, don't stop now. Gather more garden ideas as you peruse the following: