Plants for a Foliage Garden 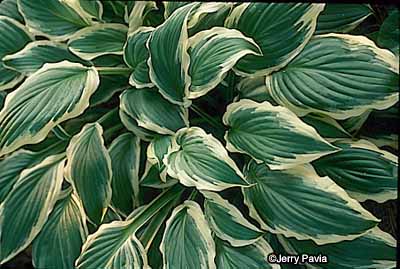 Hosta fortunei has dimension and color with its dark green leaves edged in white.

Plants for a foliage garden are incredibly varied. Not a uniform shape and shade of green, foliage comes in all shapes and sizes. From swordlike grasses to wide, round leaves, and from a thousand, intricate shades of green to red, white, and gold, foliage isn't just a backdrop for other, flashier flowers.

Whether they are part of a garden with flowering blossoms or unified in a single foliage garden, the following plants will shimmer and shine, adding luster to any landscape.

This grass features silvery-blue shards of leaves, but it also produces yellow spikes of flowers in the summer.

The showering cascades of long leaves gives this grass its name.

This colorful greenery produces huge leaves in the shape of -- what else? -- an elephant's ear.

With its densely packed fronds, this fern is hardy and adaptable.

The hard fern is one of the few plants that remains green throughout nearly the entire year.

A perennial, hosta's fortunei blossoms with mauve-colored flowers in the summer.

Requiring little care, this hosta provides a burst of color in a shady area.

This hosta produces lilac-colored flowers against a backdrop of thick leaves.

With its undulating, curved edges rimmed in dark green, the bright green leaves stand out.

This petite hosta is often passed over for more attention-grabbing plants, but its lavender blooms are lovely.

The striated leaves of this hosta are tough and glossy.

The lance-shaped leaves of this fern are attractive, but the fern is also toxic when ingested.

Leaves erupt from a single stalk on this plant, lending a garden a tropical air.

This plant is easy to care for and readily reseeds itself.

This fern is named for its large fronds, which resemble the plumage of an ostrich.

A water-lover, this fern grows in the wild along rivers and streams or wet meadows and bogs.

This hardy grass grows tall with cloud-like halos on top. It's also used for grazing and is resistant to fire.

Producing fragrant blooms, the flowers of this plant are often used in Hawaiian leis.

If you think foliage is fabulous, wait until you see what else you can do with your backyard garden: