Green Guerrillas and Other Gardeners 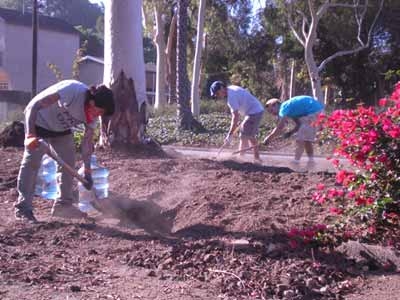 These Angelenos are about to turn this unused patch of land into a groomed garden.
Photo courtesy www.LAGuerrillaGardening.org

Modern guerrilla gardening took root in New York City in the early 1970s and grew from there, but there have been earlier cases noted throughout the world. Community gardening, a similar concept, also has a broad historic base, some examples being the Vacant Lot Cultivation Societies of the late 1800s and the Liberty gardens and Victory gardens grown during World War I and World War II. To learn more about community gardens, take a look at How to Start a Community Garden.

­The inception of the modern guerrilla gardening movement is often credited to New York City resident Liz Christy. In 1973, she founded the Green Guerrillas, and the first lot they revitalized is now a flourishing park located on the northeast corner of Bowery and Houston streets in Manhattan. The group was also known for planting window boxes and distributing seed bombs (we'll learn more about those on the next page), as well as educating interested members of the public through workshops and consultations. At first, the organization was at odds with the city government, but in time, the municipality legitimized their efforts by establishing Green Thumb, an official urban community gardening program that now boasts more than 600 gardens.

Nowadays, green guerrillas are almost everywhere. One popular Web site, www.GuerrillaGardening.org, acts as the unofficial clearinghouse for these soldiers of sod. The site features blogs, forums and tips, with thousands of registered users from all corners of the globe. Many local clubs exist in different cities, from Los Angeles to London.

If you think guerrilla gardening might be the thing for you, click to the next page to learn how to instigate your own clandestine troop dig.