How Does Your Guerrilla Garden Grow? 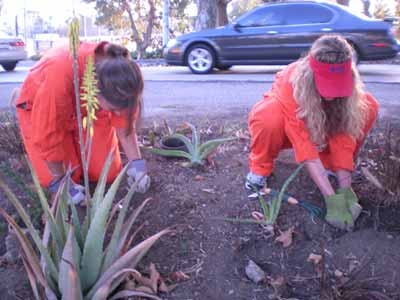 These two guerrillas work quickly to get their plants in the ground.
Photo courtesy www.LAGuerrillaGardening.org

Guerrilla gardeners can strike both public and private land with varying degrees of success. In some cases, private owners enjoy the free improvements made on their property. Others protest because of issues pertaining to liability or basic private property rights -- the land might be an ugly blight, but it's their ugly blight. If, for whatever reason, private owners take offense to your handiwork, they usually have the law on their side, and it's sayonara seedlings.

­When it comes to public land, the story changes somewhat. In some places there are laws against planting on public property; in some places there aren't. Some police officers, lawmakers and city workers take a hard line approach against guerrilla gardening, while others accept the logic that a lush planting on what was previously a scrappy patch of public land isn't such a bad deal. It's hard to argue with the idea of free flowers and free labor. With funds for landscaping often lacking in city budgets, many guerrilla gardeners are eager to fill the gap, while at the same time sharing their artistic talents and imaginative flair with the community.

A guerrilla garden can even become validated and sanctioned. What begins as an effort to beautify land sans the red tape, transforms into a permissible activity. Less covert ops perhaps, but the hours are usually better. On the other hand, you might end up with your hands full trying to save your guerrilla garden from the mower. Many of these warriors against weeds have seen the fruits of their labor trampled by the likes of unappreciative citizens or callous companies. Food gardens often cause the most complaints, as the issue of accountability comes into play if anyone becomes sick after eating tainted fruits and veggies.

So how do you know if that pretty new patch of flowers you recently noticed on your drive to work is the opus of a local guerrilla gardener? The best way to find out is to go online and check out the forums for troops in your area. If you live in a major city, chances are good some local guerrillas are already in operation. And even if you have to pioneer operations for your city or town, it's likely others won't be long to follow.