Can I go without a refrigerator?

Browse the article Can I go without a refrigerator? 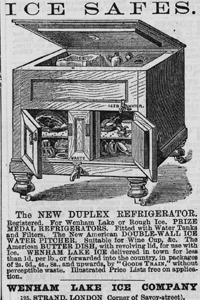 ­When refrigerators hit the market in the late 1800s, it was a huge leap forward for civilized living. It offered a simple solution to the problem of bacteria-laden, disease-causing old food, not to mention the issue of losing money buying food that went bad before people could eat it all.

With all the obvious benefits of preserving food through artificial cooling, it's hard to imagine people voluntarily giving up their refrigerators. Still, a recent, small-scale movement within the ultra-"green" community has people doing just that. They're trying to reduce their carbon footprint by foregoing the icebox.

All household appliances use energy, and in almost all cases, energy means greenhouse-gas emissions. A typical refrigerator purchased in or after 2000 uses about 450 kilo­watt-hours of electricity per year (an older model might consume two or three times that) [source: Wisegeek]. Those kilowatt-hours translate to roughly 660 pounds (272 kilograms) of carbon dioxide, which is about the amount of CO2­ you emit by burning 35 gallons (132 liters) of gasoline in your ­car [sources: EPA, Slate]. Stated simply, driving your car about 800 miles (1,287 kilometers) emits the same amount of CO2­ into the atmosphere as cooling your food for a year.

­For people who choose to give up the fridge, the greenhouse gas emissions related to running the appliance outweigh the benefits of refrigeration. To most people living in the developed world, though, going without a refrigerator seems like a nearly impossible thing to do. Is it easier than we think?

To start, it seems giving up the refrigerator doesn't necessarily mean giving up cold food. 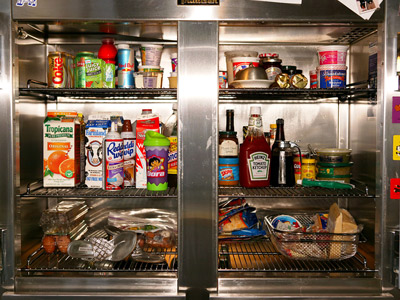 Your shoes are one item (along with some condiments) that definitely do not require refrigeration.
Matthew Peyton/­Getty Images

­If you're like most people in the United States and Europe, the refrigerator is part of your daily life. You store your leftovers, dairy products, fruits and vegetables to keep them safe to eat and help them last longer.

But, longevity aside, some of the things you refrigerate may do OK at room temperature. Condiments like ketchup and mustard, which lots of us are in the habit of storing in the fridge, typically don't need to be refrigerated. And while fruits, vegetables, cheese and butter may stay edible for weeks in the refrigerator, if you plan to eat them within a week, they can do just fine on the counter in a cool, dry place. After that, though, you'll probably be dealing with mushy produce and moldy dairy, and you'll have to throw them out.

This fact of refrigeration -- it preserves food so it lasts longer -- means that people who decide to go without have to alter the way they buy and store food. First, few people who have unplugged their refrigerators actually go without any cooling at all. Most of them use a cooler, a small freezer or both. Some have a system of freezing bottles of water in a mini-freezer and then using those bottles to keep a larger cooler cold. That way, they can still store things like meat and milk at home. Others find a good ice source and just live with a cooler at home, with no electric cooling source at all. And if someone lives in a cold climate, storing yogurt or cottage cheese outside on a cold day is a viable option.

No matter what the cooling source, people without a refrigerator have to change the way they buy food at the store. In other words, no more trips to the Costco meat department. Buying chicken for dinner means buying exactly how much chicken you can eat, because you don't want to have to store leftovers. Same goes for other perishables: Instead of a 3-pound (1.3-kilogram) bag of apples, you have to limit yourself to just a few; gallons of milk may have to be replaced with quarts due to space limitations in the cooler. And buying smaller amounts can mean spending more money. Throwing away food that's gone bad can cost you money, too. So finances have to factor into the decision to unplug the fridge.

There are a few other real-world issues that also have to be balanced against the electricity you save by giving up a refrigerator. 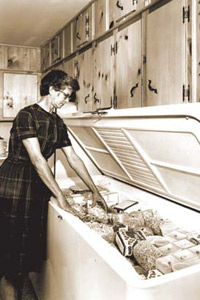 Using a freezer as a fridge replacement doesn't necessarily result in super energy savings.
Image courtesy of the TVA

If someone would go so far as to stop using a refrigerator, it must use up a whole lot of electricity, right?

In fact, it doesn't. Compared to other major home appliances, it uses very little energy. A quick run-down of common, newer appliances shows that the refrigerator falls pretty far down on the list [source: Wisegeek]:

Since the home refrigerator is not a top consumer of power, some eco-minded individuals think getting rid of it is a waste of energy (so to speak). For one thing, the cost-benefit trade-off may not work out, since you might end up dealing with a lot of rotten food that goes to waste. For another, buying food in smaller amounts can mean you consume more packaging and burn more gas driving to the grocery store more often.

Finally, for people who go the freezer route, the small energy savings achieved by unplugging the fridge is reduced by plugging in the freezer. A small chest freezer (less than 6.4 cubic feet or 0.18 cubic meters) can consume more than 200 kilowatt-hours per year [source: EERE].

So, what to do if you want to reduce your refrigeration footprint, but you're not giving up the fridge? First, you can replace an old unit with a new, high-efficiency Energy Star rated appliance. But you can also use better refrigerator habits (which won't cost you nearly as much), such as cleaning the coils annually to keep the unit running efficiently; testing the door seal to make sure it's tight; deciding what you want to eat before you open the door so you don't stand there losing cold air; and keeping the fridge relatively full, which helps the temperature bounce back faster after you open and close the door.

And, as with most technologies, keep your eyes open for innovations. U.K. scientists are trying to revitalize an old refrigerator invented by Albert Einstein and colleague Leo Szilard, which has no moving parts and runs only on pressurized gasses. It requires no electricity at all. A Cambridge, Mass., group is working on a fridge design that runs on a diesel (or biodiesel) generator and solar panels, and that cools using thermoelectrics instead of toxic Freon.

Eco-friendly refrigerators like these are far from hitting the shelves, but you never know -- in 20 years, home refrigeration could be as green as a picnic cooler.

For more information on "green" refrigeration (or the lack thereof) and related topics, look over the links on the next page.