10 Tips for a Cutting-edge Green Home

Browse the article 10 Tips for a Cutting-edge Green Home 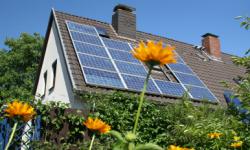 You know all about R-values, Energy Star and LEDs, but it's just not enough for your home to be green. Your place needs to be the very coolest -- with enough cutting-edge green technology to make Captain Planet, well, green with envy.

Basic green technologies have been incorporated into home design for centuries (facing a porch due east to capture the morning sun, for instance), but the more extreme examples are still well beyond the dreams of all but the most eco-conscious. Some, however, are as simple as incorporating a new mindset into the construction process.

So, if using your bathwater to irrigate your garden sounds like fun, or if sleeping under a sod roof sets your heart aflutter, keep reading to discover the latest green technologies that may be coming to your home soon. Cutting-edge though they may be, these environmentally friendly technologies won't necessarily cost you a lot of green, either.

Turn off when you turn in

Turn your heating down before bedtime saves energy, and once you're tucked in you'll never notice the difference. Get more tips at FutureFriendly.com

One of the most cutting-edge technologies used in green building is really one of the most basic -- modular, or prefab, manufacturing. Sections of the house are constructed in a factory, then moved to the home site and erected. Building in the controlled environment of a factory minimizes waste. Prefab building also lessens site disturbance, because there's no need to store large quantities of building materials on the site. The pieces are delivered all at once, so construction workers aren't driving back and forth to the site every day, reducing the vehicle emissions added to the atmosphere.

Don't think "modular" means "mobile home." Prefab houses come in all shapes and sizes and can be customized to fit your needs. You can also utilize some prefab pieces, like precast foundations, in a more traditionally built house.

One word: bamboo. As wood becomes scarce, builders are fully turning to this ancient building material. Another old favorite, adobe -- earth dried into bricks or piled in a building shape -- is making a comeback. For more insulation, look to cob, a mixture of straw and clay that was a common building material in 19th century England. Other variations on the earth house: rammed earth (think of the Great Wall of China) and poured earth. Builders in the American Southwest are also experimenting with earthbags, polypropylene bags filled with dirt, straw or crushed rock. The earthbags are formed into walls and then covered with plaster. Straw bale construction is a variation of this, as is cordwood, which looks like a woodpile. Cordwood walls have short pieces of wood that wouldn't have much value otherwise. If you're really into recycling and have a lot of documents that need shredding, make a batch of papercrete -- a mixture of repulped paper, Portland concrete and sand -- from those shreds.

Solar thermal systems for heating water simply collect the sun's heat, but the high-tech way to harness the sun's power is with a photovoltaic (PV) system. When sunlight strikes the PV modules, it frees electrons. Semiconductors capture those electrons and turn them into electric current. The system will work anytime the sun is shining, but it works best when the sun is directly over the modules. As long as the sun keeps shining, you've got fuel -- with no noise, air pollution or additional cost. Still, the systems are expensive, and the amortized cost (what you'll pay over the life of the system) is as much as four times as high per kilowatt hour as the cost from a utility company. The newest PV technology uses thin film solar panels that manufacturers claim bring the cost per watt down to the level of utility companies.

It's not a Chia Pet -- it's your house, with plant-covered walls and a roof garden reaching toward the sky. Vines and roof gardens have been around for millennia. The Hanging Gardens of Babylon were one of the Seven Wonders of the Ancient World, remember? But nowadays, green roofs and living walls aren't just valued for their looks. Plants fight pollution by absorbing noise and recycling carbon dioxide. Plants on the walls also add a layer of insulation. They lessen the effects of the urban heat island, cutting utility bills for the home. Some water purification systems use green vines to treat water for recycling. Of course, let's not forget the main benefit -- it's really neat to wander up to your roof to pick some lettuce and tomatoes for tonight's salad.

Possibly the lowest-tech item on this list of tips is one of the most cutting-edge. But really, it's just that builders are remembering what our ancestors knew: Where you build matters as much as what you build. It's called passive design, and if architects use basic principles, the house itself will do a lot of the work when it comes to energy efficiency. For instance, a passive solar house doesn't use mechanical means to store solar energy. Instead, the placement of the house (on a north/south axis) and the requirement that the south face should receive sunlight between 8 a.m. and 3 p.m. during the winter means that natural processes can keep things warm or cool as needed.

What do you and your house have in common? You both need to breathe. Tightly built, energy-efficient homes don't allow for an exchange of air from inside to outside, keeping pollutants trapped indoors with you. Ceiling and attic fans, operable windows and skylights, and high-tech ventilation system filters keep pollutants from building up in your house and in your lungs. One system called Artica recycles air in the house for heating and cooling using a thermal battery made from recycled materials and no harmful coolants. The savings in energy costs? More than 90 percent. For the most extreme ventilation systems, move on up -- to a treehouse. Some cutting-edge homes are built in the treetops to catch the prevailing breezes.

You don't have to switch to those funny-looking compact fluorescent light (CFL) bulbs in order to get cutting-edge green lighting options in your home. LEDs (light emitting diodes) last longer and are more energy-efficient than traditional bulbs or CFLs. They're not widely available yet, and you probably don't want to pay three times the price of a CFL. But the bright light of LEDs will soon be illuminating the world as their price falls. LED fluorescent tubes are much brighter and last longer than the old fluorescents you're familiar with from the office. They'll save hundreds of dollars in energy costs over their lifespan. For the ultimate money saver, don't forget natural lighting. Strategically placed windows and skylights let in light that won't charge you an electric bill.

If the sun isn't shining, the wind is probably blowing. A non-polluting home wind power system is the perfect partner to a solar panel system. Those turbines at the top of the tall towers collect kinetic energy when the wind blows, converting it to electricity. A wind turbine can lower your home power bill by as much as 50 to 90 percent. You may actually find yourself on the opposite side of the table -- federal regulations require that utility companies connect with small wind energy systems. You'll essentially be selling power to the utility company if your turbine generates more electricity than your home can use. New turbines make less noise and last longer. For many years, wind turbines have been seen mainly in rural areas, but the urban and suburban market is opening as systems become more compact.

Why not let Mother Earth provide your power? Geothermal energy can do it, using energy from when the Earth was formed, solar energy and energy from the radioactive decay of minerals. Humans have been taking advantage of geothermal energy for thousands of years, using it to heat homes and even baths. Until recently, we could only tap geothermal energy at the Earth's tectonic plate boundaries, but new technology has expanded our capacity to use our planet's stored heat. Residential heating and cooling systems draw on radiant heat stored in the earth to heat the home during the winter, while they send hot air back down below the surface in the summer. Individual systems that generate electricity using the power of geothermal energy are on the way.

Drawn to a life of eco-crime? Gray water recycling offers lots of opportunities. Gray water is water that has been employed for household use. Reuse of gray water is illegal in many states because of the potential to contaminate groundwater with bacteria, but many folks do it. The most common offense? Re-routing your clothes washer to drain outside and water the plants. That's illegal in most states. Don't want to go to jail for conserving water? There are high-tech residential systems that filter gray water to remove sediment and pathogens. For now, they're quite expensive and tightly regulated by the government.