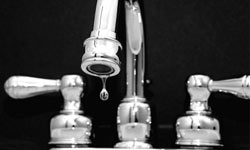 Conserving water can do wonders for the environment and your cash flow.
©iStockphoto.com/jhorrocks

Next time you turn on the tap, think of the water pouring out as liquid gold going down the drain. It's that precious. While water makes up more than 70 percent of Earth's surface, only 2.5 percent of it is fresh water, and less than 1 percent of that is fit for human consumption. According to UNICEF and the World Health Organization (WHO), nearly 1 in every 8 people across the globe can't access safe drinking water. Even by doing something seemingly conservative, such as taking a five-minute shower, you may be using more water than an impoverished person in a developing country gets access to in an entire day.

There are several ways you can cut back on water usage, protect one of our planet's most vital resources, and maybe even save some cash in the process. Read on to find out how to get started.