Browse the article What is gray water, and can it solve the global water crisis? 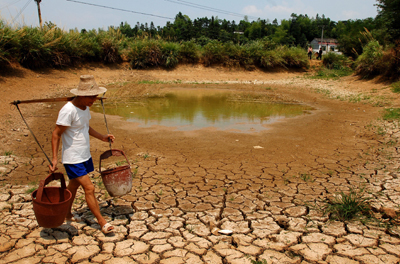 The global water crisis affects the water supply all over the world, including China (above). See pictures related to green living.
Guo Liliang/ChinaFotoPress/Getty Images

Due to a one-two punch of a booming population and severe droughts across the globe, the Earth is in what the United Nations is calling a "water crisis" [source: U.N.]. It's possible to make do with just a few gallons a day, as people do in many parts of the world, but households in the United States use an average­ of 400 gallons of water per day [source: EPA]. With a growing awareness of this disparity, some Americans are beginning to think about ways to cut down on their water usage. In some states -- especially in the southeastern and western United States -- residents don't have a choice: Many state governments have issued bans on outdoor watering and are asking residents to take steps to cut their water by as much as 20 percent [source: WRAL].

Conserving water is a great place to start. Running your dishwasher and washing machine only for full loads, for example, can cut a household's water consumption by an average of 1,000 gallons a month [source: Water -- Use It Wisely]. For some, though, simple water conservation doesn't go far enough. One thing they may consider is recycling their home's gray water.

Gray water is all of the wastewater that drains out of your washing machine, sinks and bathtub or shower. It can be easily treated and recycled in your home. In developing countries, the concept of reusing water is old and established, but in othe­r nations where people consider water plentiful, it's used once and thrown away.

­­The problem has been getting steadily worse. In the United States, for exa­mple, the national population increased by 52 percent from 1960 to 1990, while water consumption increased 300 percent in the same period [source: University of Geor­gia]. The increase in demand on water -- and the effects of reusing water on the environment and public health -- are making gray water a viable alternative to simply going back to the faucet for more.

Areas where water is scarce -- like Texas and parts of Australia -- have large water recycling plants that treat gray water and send it back for use, but since gray water is easy to treat, it's becoming increasingly popular for people to collect and reuse in their own homes. An entire cottage industry -- born out of the green movement -- has sprung up around gray water. People interested in reusing the water in their homes can have commercially produced gray water recycling systems professionally installed. This sudden surge in interest in gray water is a bit ahead of state governments, many of which are still studying water reuse. In some states it's not legal to collect and use gray water, and in others it's necessary to obtain permits and observe restrictions first.

So, what exactly can you use gray water for? Read the next page to find out. 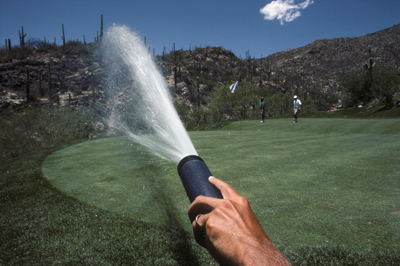 Using gray water is certainly a good idea, but it also has its drawbacks. While gray water is a lot less harmful to people than the wastewater that leaves your toilet -- called black water -- it's still technically sewage. Dishwater contains particulate food matter, which may be rotten. Gray water from your washing machine may contain bleach, which is a hazardous chemical. And bath water may contain fecal matter and dead skin that sloughs off while you bathe. The amounts of these wastes are small enough to prevent gray water from going through the treatment process that black water does, but you still shouldn't drink it. Your plants, however, will love your bath water.

As a matter of fact, irrigation for lawns and gardens is the only advisable application for using gray water. The United States Environmental Protection Agency says that, in 2007, water used for irrigation constituted 15 percent of total water consumption in the United States [source: EPA]. And this was first-run water -- the same stuff you drink.

Your plants don't necessarily need fresh water, and what's more, some additives in gray water can actually help them grow. Cleaning agents found in laundry detergent -- stuff like phosphorus and nitrogen -- are actually used in many plant fertilizers sold on the market. Some plants, however, like gray water more than others. Since gray water is alkaline-rich, it's not suitable for use in watering acid-loving plants like azaleas and rhododendrons.

Be careful watering any plants with gray water without knowing what's in it first. In addition to nitrogen and phosphate, laundry detergents also contain sodium salts. These salts can build up over time and become toxic to plants, essentially poisoning the soil. To avoid this, avoid using products that contain softening agents -- which are generally high levels of salts. You can also cut down on the salt build-up in the soil by alternating your watering applications with gray water and fresh water.

Since the soap you use in the shower is generally less harmful than laundry detergent (it's mild enough to use on your skin), bath water is the most prized gray water for your plants. But again, there's the fecal matter. For this reason, some states require that gray water systems remain entirely underground and irrigate plants directly at the roots, using drip irrigation systems. Even gray water proponents who irrigate above ground recommend that the gray water be delivered using the flood method or with drip irrigation. Either way, spraying or misting plants with gray water generally can be a threat to your health. You should also irrigate with gray water on flat ground and avoid allowing it to run off into other yards.

Also because of that pesky fecal matter often found in bath water, gray water proponents advise using gray water to irrigate only your ornamental plants and lawn. It shouldn't be used for plants that bear fruit or vegetables that you'll eat -- like tomato plants. And under no circumstances should gray water be used for edible root plants, like carrots or potatoes. The roots absorb all of the harmful stuff in gray water.

So now that you know about gray water you may be ready to start using it at your house. But how? Read about some of the methods to get a gray water plan started. 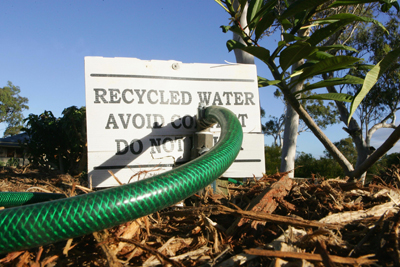 Although your plants will love gray water, it's not safe for you to drink or use.
Jonathan Wood/Getty Images

Collecting gray water doesn't require a specialized system. For example, you could easily use your old pet water to give your plants a drink before refreshing the animal's water bowl. The same goes for the old water in your fish tank. Fishbowl water also has the added benefit of nitrogen-based nutrients from fish waste.

If you look around your house, you'll find a number of different places where you can find and reuse water. A free-standing outdoor air-conditioning unit produces 10 to 15 gallons of condensation on a hot day, and all of this is wasted [source: Free Patents Online]. There are some condensate collection kits available in stores that can collect your A/C unit's condensation and send it to an irrigation system.

­You can also collect water from a window-mounted air conditioning unit. Simply place a bucket underneath the system to catch the condensation that drips from it. You can add a drip irrigation system to the bucket for low-maintenance plant watering. What's great about using A/C units as a source for reusable water is that they produce the most condensation during the hottest months, when watering bans are most prevalent.

Bath water is considered the best source for gray water, but collecting it using a bucket can be tedious and backbreaking. One British company figured out a way to collect bath water easily with the Ban Beater. This system uses a hose and suction to siphon the water into a cistern, which can be toted outside and used for localized watering.

Perhaps the easiest place to collect gray water, though, is from your clothes washer. Most models have a drain pipe exiting the back of the washer. Water can be easily removed from the drain to the sewer and placed into collection buckets. Just be sure, when collecting gray water with this method, that you have enough buckets and quick reflexes to catch all of the water exiting your washer during the drain cycle.

Professionally installed gray water collection systems feature extra plumbing that separates gray water from black water sources. These systems collect gray water, send it to a central filter and pump it out into an irrigation system. It's imperative these systems contain an emergency shut-off valve, in case of malfunction. They should also include a way to route your gray water into the sewer when you don't need it. These systems are much more expensive than doing it yourself, but are more convenient, too.

Whether you have a professional system or collect gray water your own way, it's important that any system you use have a filter -- it can be as simple as a nylon stocking or a window screen -- to remove debris like hair and grease from the water before you use it for irrigation. You should also pay attention to the amount of gray water you use for watering your plants. The University of Massachusetts suggests that you use a half gallon of gray water per square foot of well-drained garden soil per week [source: UMass].

So will gray water solve the global water crisis? Not by itself. But as awareness of its benefits grows, gray water could take a chunk out of the amount of fresh water people use. After all, watering plants constitutes 15 percent of the 400 gallons the average American household uses per day. If everyone in America used only gray water for their plants, it could save 6.6 billion gallons of water every day. Even better than that, when you reuse water, you save electricity, since it takes power to pump water to your house. This electricity is often generated at coal-fire power plants, so reusing water can actually help clear the air, too.

For more information on water, recycling and related topics, visit the next page.