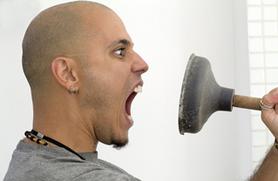 Oh no, it's the dreaded clogged toilet. Whether you are at a party or in your own home, nobody ever wants to have to deal with a clogged toilet. But it's Planet Green to the rescue with a batch of 7 of the greenest ways to get the blockage cleared and you back on the track to smooth flushing. These methods avoid harsh chemicals and focus on low impact, easy and less messy options to begin, then follow up with a few last resort things to try before calling in the plumber. So get out your plumber cracks and let's go for a swim...

Within the first flush or two, right when the trouble starts is the best time to take advantage of the tap trick. What you do is forcefully tap on the backside of the bowl with your shoes (or bare feet). Surprisingly, about 70 percent of the time with a minor clog this will dislodge the trouble area and leave you home free.

If the tap doesn't get you home free your next option is to pour yourself a bucket of hot tap water and poor it down the toilet. A gallon or two should do the trick with a minor clog. The key here is to poor quickly, but not so quickly you splash yourself and the floor. If you find you aren't getting anywhere, then it's time to move on.

Pouring one cup of baking soda and one cup of vinegar down a sink has been known to unplug a drain, and could handle a toilet. This is assuming that it is not so full of water by now that the mixture will become too diluted once placed in the bowl. If it is, then move straight down to the boiling water and dish detergent trick.

If the hot water straight from the tap is not enough, perhaps a kettle of boiling water and liquid dish washing detergent will do the trick. Poor about a quarter cup of your favorite green dish detergent, and allow it to lubricate the lodged material while you wait for your kettle to boil. Poor in the water (being very careful not to splash yourself) and cross your fingers that this'll do the trick... otherwise we are going to have to get a little messy (just a little though).

The Slightly Difficult and Messy Way to Unclog a Toilet

While a bit messy, the plunger has been a staple for the do it yourself plumber since, well, since the first toilets began getting clogged. The key to getting the best suction is to plunge as you flush at the same time. Now if this one fails, then I am afraid we are going to have to get down and dirty.

The Messy But Effective Way to Unclog a Toilet

If you have a weak stomach you will certainly not want to go down this road, but sometimes if you have a rather (ahem) large object wedged in the toilet, there is no other way but to remove it manually. Plumbers have found all sorts of strange things plugging a toilet such as cell phones, underwear, so you never know what you might find once you start digging.

For around $25 at the hardware store you can purchase what is called a manual toilet snake. You only have to buy it once and you avoid load of chemicals. This handy little device can be threaded through the toilet and then wound around until the blockage is released. This can get a little messy but it sure beats using your hands. This is especially useful when the blockage goes deeper into the pipe than the toilet bowl itself. If this doesn't work, try again and then call a plumber! Note: Do not use a clothes hanger in place of a snake, as it can severely scratch the porcelain surface of the toilet bowl.