How to Create a Vignette

The Rules of Scale and Shape 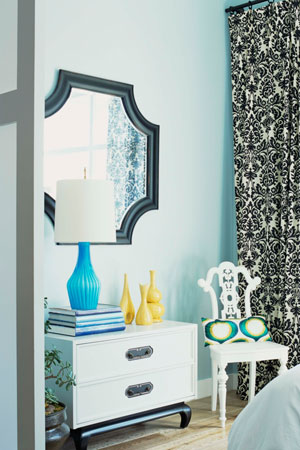 A successful vignette creates visual interest. The blue lamp anchors the scene and creates scale. The yellow vases follow the rule that odd-numbered items grouped together are more pleasing to the eye.
Dominique Vorillon/Getty Images

Indulge us a moment and group together four objects. Now add a fifth. Looks better, huh? That's not an accident. Objects assembled in odd numbers are more harmonious and pleasing to the eye. This is the first rule of a vignette: Make sure that you have an odd number of dominant objects. (Also, keep in mind that a stack of books, or any other uniform set of multiples, is considered one dominant object.)

Now look at your anchor object in relation to the rest of the items you've selected. Is there a balance in the relationship among your items? Here's the second concrete rule for vignettes: If you have a sculpture that's your anchor object and it's measuring about 2 feet in height, pair it with an item or items that are half the size of the sculpture. Let's say you've identified a 1-foot-high candle as the anchor. Now find another item or items that are roughly half the size of the candle. The concept we're talking about here has to do with the golden ratio, basically finding symmetry in the relationship of lines to one another. The point is that you don't want a huge object sitting next to teensy-weensy ones, with no height differentiation in between.

And the third concrete rule for your vignette follows similar principles of scale: Look for variety in shapes. Your tablescape can skew more toward the rectangular in shape, if that's what you're after, but there should be a couple of other shapes interspersed to break up the visual field.

Now, about that owl collection...