Can I make my landlord green my home?

Browse the article Can I make my landlord green my home? 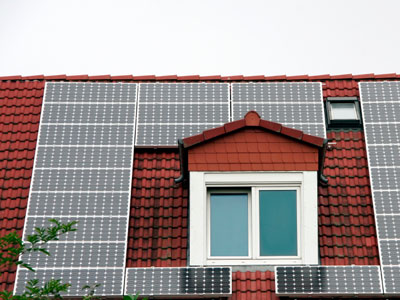 Adding solar panels to your roof is an environmentally-conscious move ... but can you make your landlord do it? See more pictures of green living.
© ­iStockphoto/JestersCap

­These days, it seems like you can't go more than a few hours without hearing the word "green" thrown around. "Going green" is shorthand for a person or organization taking steps to help out the environment. There are hundreds of ways a household or company can go green, and some are less expensive than others.

Using sustainable building materials is a great way a developer or homeowner can help reduce their environmental footprint. Changing out old appliances for more efficient models or beefing up the insulation is another way. Switching to solar or wind power or choosing from a number of alternative heating and cooling sources are more expensive options.

­These methods generally cost some serious up-front money and pay off financially in the long term. But going green doesn't have to mean expensive retrofits. Simply recycling and composting your waste, using low VOC paint or adding weather stripping to drafty windows can help reduce the carbon footprint of your home or office. Many new buildings and homes are striving to achieve Leadership in Energy and Environmental Design (LEED) certification, a green building ratings system devised by the U.S. Green Building Council (USGBC).

All these efforts by homeowners and commercial builders are leading the way to help preserve the future of our planet. But there's a large segment of society that seems to be overlooked in the green movement: the tenants. In late 2007, the United States Census Bureau estimated that there were 110.3 million occupied households. Thirty-five million of these households were inhabited by renters [source: census.gov]. Tenants who want to reduce their footprint are largely on their own, but there are some interesting new incentives all over the world encouraging landlords to go green.

As of 2009, a tenant can't actually force a landlord to green his or her rental property anywhere in the Untied States. Most states only require that the dwelling is habitable. You can always make a request, but landlords are in the business of making money. If it won't save them money, it won't be a priority. In cases where the landlord pays the utilities, you may have more of a fighting chance, but even then, it can be a tough sell because of the up-front costs.

Commercial real estate is another matter. While a company can't force its landlord to go green, there are an increasing number of government incentives to encourage them to do so. All over the world, green leases are becoming more commonplace. A leasing attorney in San Francisco states that about 50 percent of the leases his firm worked on from 2003 to 2008 contained green elements [source: CA Real Estate Journal]. In 2008, the Building and Owners Management Association (BOMA) released a green lease guide to help landlords include language relating to environmentally friendly management practices. BOMA also has Web seminars on its site that help explain what green building is all about [source: BOMA].

Green leases usually state provisions for what a tenant can do with his or her office. The tenants also may be forced to share the cost of an improvement on the building if it reduces their monthly energy consumption. And a landlord can even require the use of Energy Star appliances. In the world of real estate, almost everything is negotiable.

Here are a few reasons why a commercial landlord might want to go green:

Many cities in the United States require LEED certification on all municipal buildings, and Boston has a new law on the books requiring it for all buildings more than 50,000 square feet (around 4/600 square meters). As the green building trend moves forward, it will become the norm instead of the exception. Older inefficient buildings are already becoming less appealing to potential tenants, and eventually, landlords will be forced to reduce their carbon footprint in order to stay viable.

Residential dwellings are a little behind the commercial scene when it comes to going green. The reason is probably due to the fact that many residential landlords may not be able to afford the initial costs it takes to green up their property. Retrofitting an old house or apartment building can be expensive, and there aren't as many financial incentives in place on the residential side of the tracks right now. There are some examples, though. In the United Kingdom, residential landlords can take advantage of tax credits if they install new insulation in their rental units. And as of October 2008, landlords in England and Wales are required to show prospective tenants an energy performance certificate that indicates the heating costs and their relative environmental impact.

In the United States, most residential incentives come at the state and local level. Chicago has the Cook County Energy Savers Project, a program that provides information on green practices to multi-family building owners. But if you want to encourage your landlord to go green, you'll probably have to do it yourself, because most tenant advocacy groups deal with common problems like deadbeat landlords, safety issues and evictions. Especially in big cities, there's so much going on that tenant rights groups simply don't have the time to bite into the green movement. This leaves you, the tenant, to be your own advocate.

Green Your Own Apartment 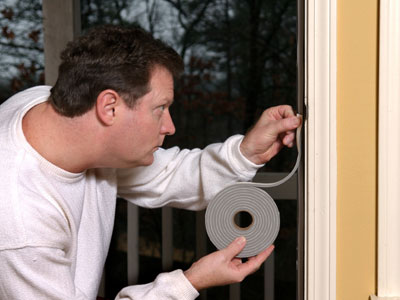 Your landlord probably won't buy into a big project like a green roof, but he or she might agree to a simple enhancement, like weather stripping.
© iStockphoto/dlewis33

­If you're a good tenant and have an amicable relati­onship with your landlord, you can always suggest some ways he or she can green up the property. Your best chance at success is to think of some things that won't cost the landlord a lot of money. If you ask them to switch to solar power, you'll probably be met with a furrowed brow or a big laugh. But if you request better insulation or weather stripping, you may actually get somewhere.

As a tenant, you can green your rental unit yourself without spending a lot of money on a property you don't own. Using environmentally friendly cleaning products, switching to compact fluorescent light bulbs and conserving water and power are all good ways you can make an impact. Recycling is another way to make a green contribution, and it actually is one of the only demands you can make on your landlord. In the United States, tenants have a right to recycle. This is typically enforced on the state and local level.

The state of Oregon requires apartment building owners to provide recycling services and the city of Portland states the process has to be as convenient as the trash service. If an apartment building has overflowing recycling bins or if they're located in a difficult-to-access area, the landlord can face fines. The city of Chicago also has a 10-year-old ordinance that requires residential recycling services for apartment buildings. A 2001 Environmental Protection Agency (EPA) study found that apartment renters are only slightly less likely to recycle than homeowners, 14.6 percent to 16 percent, respectively [source: EPA]. With 35 million renters in the United States, that makes more than five million residents eager to do their part and recycle.

To find out about what your rights are as a renter with green on your mind, check out your state's tenant rights at the Department of Housing and Urban Development (HUD) Web site.