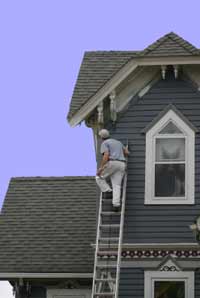 Improvements on a historic home can get expensive.
© iStockphoto.com/Mark Tenniswood

Some homeowners don't appreciate having to apply to a higher power to make changes to their own home, but one of the jobs of a local preservation commission is issuing certificates of appropriateness (COAs) to approve work on buildings in the district. Some districts are more lenient on what requires a COA. In Georgia, for instance, neither paint color nor minor repairs with the appropriate materials require an application for a COA.

Other local ordinances may have rules on everything from your gutters to your fence, and in these districts, you may start to hear horror stories about what's allowed and not allowed. In Philadelphia, one woman's rose garden was threatened because her pergola, trellis and planter were covering the exterior of her building. Neighbors wanted her to cut down the roses, but she was eventually allowed to keep the flowers as long as the large planter boxes and latticework were removed [source: Stoiber]. In 2008, homeowners in Annapolis, Md., sued their historic preservation commission to keep columns they had installed on their front porch; the couple had used fiberglass and the commission demanded that the columns be made out of wood [source: Fuller].

Some landowners are confused about what constitutes the need for a COA, which can result in them doing work without proper documentation and risking fines, or being too scared to start the work at all. Money can also be a major concern where COAs and local design review is concerned. Using historic materials, such as wood instead of vinyl siding, is more expensive. In addition, higher property values can also bring higher property taxes, which may eventually drive up prices so that people who have historically lived in a certain neighborhood can no longer afford to do so. There is also some concern that local design review is such a favored way of managing change in a neighborhood that neighborhoods that aren't truly historic are seeking historic status [source: Hamer]. For example, a subdivision in Phoenix, Ariz. tried to form a local district because their ranch homes were the first in the city with central air conditioning [source: Munoz].

For some neighborhoods, you may be able to make the case that some homes are historically significant, but do you want to preserve them? Would you want to live in a tiny home that you couldn't change because it was historic? For these reasons, historic districts often face a long, uphill battle in gaining the public support necessary for official historic designation.

To learn more about historic districts, see the links below.

In 2004, Home Depot built a store in Manhattan's Ladies Mile Historic District. Home Depot's main challenge was adding loading docks to the building, which was built before trucks were used. They did so by studying historical documents and finding some windows that were not originally part of the building. The walls around the windows were also in poor shape, so Home Depot proposed removing the windows, improving the appearance of the walls and installing docks there.