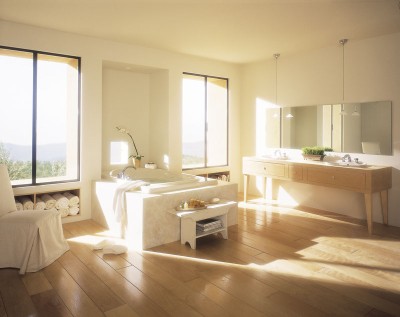 The spacious ambiance in this modern bathroom is inspired by California spa designs.

Contemporary style embraces a fairly wide range of looks. "Modern" design is officially pegged to begin with the Arts & Crafts/Mission styles that arose in the early 20th century as a revolt against the fussiness of Victorian traditional style.

But in the early 21st century, "modern" is popularly used to describe design icons from the 1930s to the 1960s. "Contemporary" -- sometimes used interchangeably with the word "modern" -- is less a structured concept and more a way of life.

Contemporary is cool and clean and can be as casual or as elegant as you please. Because so much of a bath is dominated by modern fixtures anyway, many people simply choose contemporary style, regardless of what they're using in the rest of the house.

In general, contemporary style appears simpler than traditional: Curves are looser and more sculptural; squared-off angles are commonplace; surface details are minimized or eliminated; and textures, rather than representational images, offer interest.

Sculptural one-piece toilets, sleek built-ins of all kinds, minimal or simply shaped hardware, and lots of chrome are all contemporary design elements. Some modern-style products make a point of revealing their structure and function where traditional style would take pains to disguise them.

Contemporary style is easily at home in the modern bath, since it's of the same generation. Whether the look is dramatic or serene, contemporary style at its best conveys an uplifting spirit of freshness and freedom.

To get a feel for a glamorous modern bathroom design, see the next page. 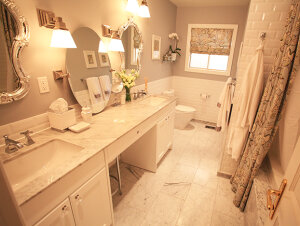 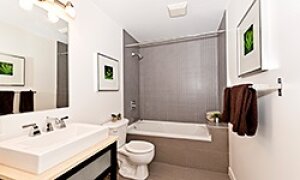 How to Add a Bathroom 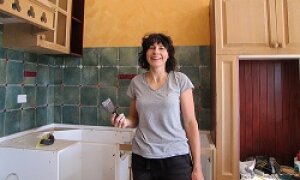