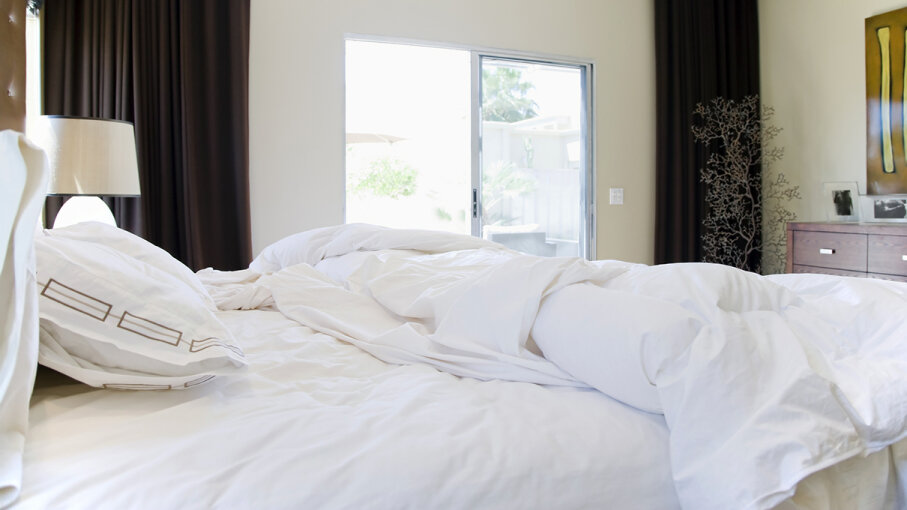 Thread count is important when you're buying sheets, but it's not the only thing to consider. Inti St. Clair/DigitalVision/Getty Images

The thread count of a set of bed sheets has become one of those numbers — like IQ, batting average or gas mileage — that's considered the single most important standard for gauging quality. When you shop for a new set of sheets, every package lists the thread count in big bold numbers: 300, 500, 800! But what does that number mean, and does it even matter?

We reached out to the Good Housekeeping Institute (GHI), a top testing ground for home goods since 1900 and awarder of the Good Housekeeping Seal since 1909. Lexie Sachs is a senior textiles analyst at GHI working in the Textiles, Paper and Plastics Lab, one of six full-fledged engineering labs at the institute, which is based in New York City.

Sachs spends her days putting products like shirts, shoes and bed sheets through the ringer, testing for softness, shrinkage, color fastness, durability, and yes, thread count. Thread count is the total number of threads (vertical and horizontal) in a square inch of fabric.

"The higher the thread count, the more fiber is in the product," Sachs explains. "The idea is that it should feel softer against your skin and be more durable."

"The sweet spot is 300 to 500," she says. "If it gets too high, the cotton could be so thin it becomes weaker. Three hundred to 500 is a good balance between softness and durability."

There are many other factors equally, or more, important to consider when buying sheets besides thread count. Fiber type is a big one. Cotton sheets have a much different feel than polyester blends, and flannel or jersey sheets (that "T-shirt" material) are whole different animals. Consumers have to choose a fiber and feel that suits their personal taste. The wrong fabric with a high thread count is still the wrong fabric.

Different weaves of fabric also will affect the way a sheet feels on your skin. A percale weave is the classic "over-and-under" weave that makes a sheet feel "light and crispy," says Sachs, while a sateen weave "floats" the yarn over several rows at a time, creating a satiny smooth feel.

What about Egyptian cotton? High-end sheets often make a big deal about the fact that they're made of 100 percent Egyptian cotton, but does it make a difference? Sachs says that Egyptian cotton has longer cotton fibers (known as "staples"), and longer fibers makes them softer and more durable. Shorter fibers can break and feel itchy or even pill — the endings become tangled and form those annoying tiny knots. That said, lab tests have shown that not all brands advertising Egyptian cotton are actually made from Egyptian cotton, so be skeptical of cheap "Egyptian" cotton sheets.

False or misleading thread counts used to be another problem. A decade ago, GHI labs found that some sheet manufacturers were using creative math. When higher thread counts became an important marketing distinction in the early 2000s, brands began to count two-ply thread (two strands of thread twisted around each other) as twice the thread count. So sheets with 300 two-ply threads per square inch were advertised as having a 600 thread count. False advertising isn't such a problem anymore.

A bigger issue now is that some brands have developed manufacturing processes that boost thread count without improving overall quality. By using ultra-thin polyester blends, textile makers can squeeze more and more threads into a square inch. Again, says Sachs, it's not that poly blends are bad — it's a personal preference thing — but an ultrathin thread might not last nearly as long.

Now That's Cool
One of the hardest things about shopping for sheets is that you often don't get a chance to really feel a product on your skin before you buy it. And even if you do, some sheets feel very different after they've been washed. One interesting development is the rise of online-only sheet brands. Many of these companies have generous return policies that let you try the sheets for 30 days or more and still send them back if you're unsatisfied.