What does thread count really mean?

Browse the article What does thread count really mean? 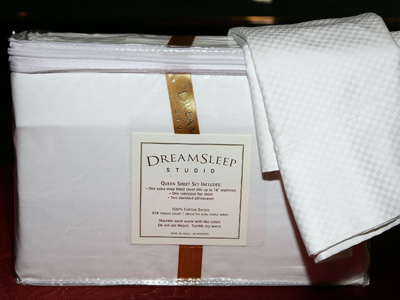 These sheets from Dreamsleep Studio were included in the Emmy Awards gift baskets in 2006. The label reads 618 thread count; but are they really that different from 400 thread count?
Frazer Harrison/Getty Images

­You might suspect thread count is simply a marketing ploy to make Egyptian cotton sheets sound more luxurious. But it's really a scientific term, with strict federal standards on how those threads are counted­.

Thread count has become a buzz word for marketing luxury sheets, shirts and other woven fabric goods. The idea is the finer threads you can weave together, the softer and finer the fabric.

But that's not always the case. According to Consumer Reports, a thread count of 200 is fine; 400 may be softer. But anything above 400 will likely only provide a higher price tag [source: Consumer Reports].

To get a sense of the type of fabric various thread counts produce, consider that a thread count of 150 (75 threads one way, 75 the other) produces muslin, which feels a little rough, certainly not silken. Good-quality sheets come in at 180, and anything above 200 is considered better quality [source: Linenplace]

To untangle this inconsistency, Consumer Reports hired an independent textile lab to count threads in a $280 queen sheet set with a manufacturer-stated thread count of 1,200. The lab counted 416 threads per inch, just 35 percent of what was claimed [source: Consumer Reports].

The Federal Trade Commission even got involved in the fracas, thanks to a request made by the Textile Bedding Committee of the National Textile Association. Bed, Bath & Beyond got sued for misrepresenting thread count and, without admitting any wrongdoing, settled the suit on July 26, 2008, by offering refunds, gift cards and discounts [source: Bed, Bath & Beyond Court Settlement].

But thread count is really only part of the puzzle as to whether or not you'll enjoy your nap (are you getting sleepy?) on your sheets. What about quality of threads and not just quantity? And what's the big deal with Egyptian cotton anyway? 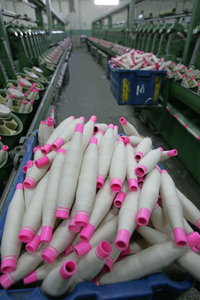 The longer the fibers, the sturdier fabric.
Cris Bouroncle/AFP/Getty Images

In the world of cotton, the length of the fiber is an indication of quality. In Egyptian cotton, the fibers -- also called staples -- are longer than in other types of cotton. Longer staples equal a stronger thread and more durable fabric. At one time, Egyptian cotton was grown primarily in Egypt, but now it's grown­ all over [source: Yves Delorme].

A process called carding, where smaller fibers get worked out, leaving the longer fibers behind, further increases the quality of raw cotton fibers [source: Yves Delorme]. And combing, another process, removes even more small fibers. After that, the clean cotton fibers get spun into threads and woven into fabrics.

The fabric then goes through two processes: singeing and mercerizing. The singeing process burns off fuzz that might develop later into piling on sheets, and take away the smooth feel. Mercerizing is a process done under pressure to increase strength and to help it accept dye.

With increased consumer awareness, the halcyon days of bloated thread counts may be coming to an end. In choosing sheets, Consumer Reports makes this recommendation: "Pick a sheet between 200 and 400 thread count that meets your other criteria. Paying more for higher thread count is wasting money" [source: Consumer Reports].

To learn more about thread count, bedding and related topics, see the links on the next page.