Top 10 Ways to Modernize Your Home 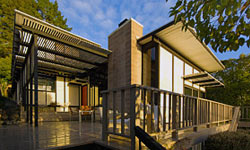 Do the names Henry Miller or Ray and Charles Eames trigger images of sleek yet comfortable lounge chairs? If so, you may already be somewhat familiar with mid-century modern design. If not, don't worry, you're well on your way.

Mid-century modern design had its heyday from the mid-1940s until the mid-1960s, when architecture and design were infused with the relaxed, yet utilitarian, ethos of the era. Designers did away with the formal filigree of yesteryear and instead sought balance between form and function by using man-made materials like plastic, molded plywood, wire mesh, plexiglass, fiberglass and Lucite in everything from chairs and tables to clocks. Glass and wood were also key materials of the era.

Apparently the style wasn't actually coined "mid-century modern design" until Cara Greenburg published "Mid-Century Modern: Furniture of the 1950s" in 1983. And it was sometimes known as "California modern style," since so many living in L.A. and San Francisco enthusiastically embraced the style.

Today, people still love this design aesthetic for its comfortable, clean and uncluttered look, so read on to find out the top 10 ways to easily incorporate this style into your home.