Fictional Man Caves We Could Live With 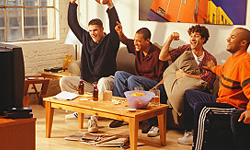 Are you allowed in your man's cave?
Ryan McVay/Photodisc/Getty Images

If your significant other is in possession of his very own man cave, you may not see much of him around the old homestead. That's the whole point of a man cave -- it's a room, sometimes a playroom, where a man can escape and forget the stresses of life. Most of the time, this involves things like Playstation or Wii, watching sports, playing pool (or foosball or air hockey or pinball -- you get the idea.) or whatever other games that teenagers typically engage in. In fact, most of the stuff that goes on inside a man cave is the same stuff you'd find in a boy cave. In the movies, man caves are a little more exciting. They're typically stocked with high-end furnishings and the latest in hi-tech gadgets. Not many people have the cash to throw down on a man cave that would leave the likes of Bruce Wayne envious. But leave it to Hollywood set designers to create the most impressive man caves on Earth. Even though these are fictional, here are a few famous man caves we could live with. Just leave that pool cue hanging on the wall.