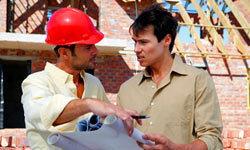 There are no official green building codes, so contractors often follow their own rules, and end up violating traditional building codes in the process. See more home construction pictures.
Goodshoot/Thinkstock

Once considered too expensive, or even a niche for radical environmentalists, green building is fast becoming part of the new standard. Green construction focuses on energy efficiency, reuse of water and building materials, and designs and systems that don't harm the environment. But through the years, so-called "green" architects, builders and engineers, either in partnership or at odds with local and national building code councils, have had to build without definitive green guidelines. Innovations led to reviews and often rejections of plans, and some eco-mavericks just built outside the traditional codes altogether.

If there were green building regulations in place, they could set the standard for what not to do, and lay the groundwork for successful models for builders to follow. Currently, there are efforts underway to attempt to set uniform standards. The International Code Council, for example, has been working on an International Green Construction Code (IGCC) since 2009 and is set to publish the code in 2012, with new green commercial regulations. It will include the National Association of Home Builders (NAHB) 2008 residential guidelines, as well. Another internationally known certification program, LEED -- Leadership in Energy and Environmental Design -- has been raising the green bar since 1998 by recognizing exceptional buildings and communities. And regional and community organizations such as EarthCraft House in Atlanta, and Built Green in Seattle, are examples of green movements within existing codes at the local level.

And it's at the local level of coding, permitting and zoning -- and hand-in-hand with qualified green construction professionals -- where homeowners and builders should get started to avoid the following common violations when they are going green.